I meet Yuna Zarai on a particularly electrifying afternoon—it's the first day that her third studio album Chapters is out in the world, and the night before she ended her tour with a sold-out performance at Los Angeles' El Rey Theatre. After opening the show with a cover of Beyoncé's standout Lemonade track "Sorry," Yuna's set felt downright electric; she crooned new tracks in front of hand-picked projections, the images filtering through her gossamer coat that she sported as part of her modernized take on the hijab.

Chapters is an album about love in all its states: the quiet frisson of a crush, the melancholy of waning affection, and most importantly, the resilience of a broken heart. It's also the Malaysia-born singer's first foray into R&B, featuring vocals from powerhouses like Usher and Jhené Aiko. Beyond the influences pulled from '90s and early- 2000s R&B, Yuna turned inward for Chapters, writing songs inspired by her real life, namely the end of a long, romantic relationship. "I can't write anything that's not real. I can't be fake."

In many ways, Chapters is the physical manifestation of Yuna's personal and professional journey—it's an album about being true to yourself with a sound that she's been reaching towards all along. "[With my last albums] I was listening to what everybody wanted," she explains, referencing her 2012 eponymous debut and its follow-up, 20013's Nocturnal. "I wanted this album to be real and honest, something people could connect to."

Yuna turns 30 this year and like most people wrapping up their second decade, it feels like a milestone. Chapters has cemented her position as a rising star in the world of R&B, but it's her playful demeanor and sincerity that make her coruscate over the rest. "I don't really care about the negative comments," she says with a smile. "I've learned what's important and that's doing what makes me happy." 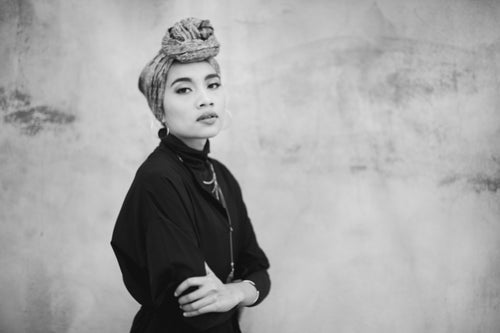 How does it feel to be back from tour? How was this one different from tours in the past?
The first time around I was on tour for a very long time—being on the road for one month is a very long time for me. It was a lot of fun this time around. I have more friends coming to the shows and I genuinely look forward to performing the new songs. Plus, I have a great band! They're awesome and have a great attitude, so it makes it really easy. We tried to keep the sets interesting, too. Toward the beginning of the tour, we were covering Prince. Then Beyoncé came out with Lemonade and I knew we had to perform a song from that.

The crowd at your show went insane when you covered "Sorry."
Everyone was really excited about it. The guy who produced that song with Beyoncé was in the audience, too!

There are a lot of parallels to draw between Chapters and Lemonade. You turned terrible things that happened into an opportunity for growth; you recognize that negative people and negative events don't define you as a person.
When Beyoncé came out with Lemonade as a visual album, I was like, 'Oh man, I have visuals, too! I had them ready for all my songs, but she came out with the album before me! People are going to think I'm copying her.' Each of the songs on Chapters has a visual component. There's a narrative in the beginning of me talking about the song before it comes on, and then people can just listen to the song and enjoy the beauty. It's a moving photograph in the end. I just wanted to do something different where the fans can enjoy the cool visuals with their listening experience.

How has it been moving to Los Angeles from Malaysia? How do you feel about the physical separation between you and your family?
It's not too bad because I've wanted to do this for a really long time. It's not like I'm homesick or anything like that. I've never been that way, but that's probably because I go back to Malaysia all the time—once every two months, at least. This year because of the new album and the on tour, it's getting a little more difficult to fly back home. I try to go back to see my family and friends every Ramadan. I don't have any family out here, so it's like 'Duh, of course I'm going go back.' I'm not one of those people who can be away from their family for two years and be okay about it. I'm really close to my family.

You were studying to be a lawyer before pursuing music full-time. What was the catalyst leading up to that decision?
I had actually failed one of my subjects in law school and this was during my final year, so I had to stay for another semester and repeat the subject. I feel like if I had graduated on time I'd still be in Malaysia practicing law, but because of that class I had so much time on my hands. I considered music as something fun in the meantime, like a cool way to make some money. People were asking me to perform at weddings and stuff like that, and it slowly grew from there.
One of my songs was on the radio, and there were offers coming in, and this was while I was still going to class once a week. Once I graduated, I talked to my dad about how I didn't know what to do. I was like, 'I guess I should take the bar, right?' but he insisted that I continue with music because it was going so well for me. It was the first time I felt like I didn't have to do the 'right thing' because it was like that for a very long time. The right thing to do was to apply for college, the right thing to do was take up law, the right thing right now was to pass this exam, and thenfinally the right thing to do was something I really wanted to do. 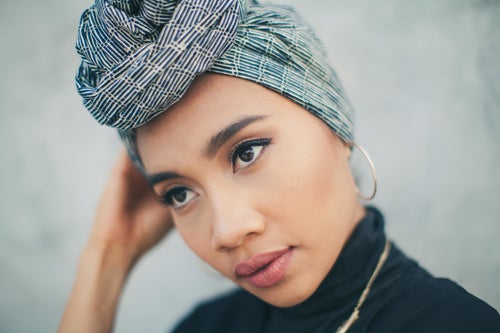 Do you consider yourself a pop star?
I don't know. I don't like the term pop star. I want to say I'm a little bit more than that. I want to be a little bit more than just a pop star. I care about my work, I care about music, I write my own music. I'm a singer-songwriter and I've been that since day one. I've never had the mentality of going into the studio and making radio hits and I imagine a pop star would be ready to do that, ready to please their friends, please their label and everybody around them. I always had a reservation about that. I want this. I have control over my creative thing. I'm an artist. In Malaysia, it's really hard to be an artist because the tendency is to turn you into an idol, a celebrity. 'Oh, she's a celebrity! Let's take photos with her! I don't care what she does, I just like her.'
I feel like it's beginning to change in Malaysia. The younger generations are able to appreciate. They didn't really care who produced this music, who wrote this music, what work was put into this music, and now they're slowly learning that in America people care about those things. Who produced that? Oh, Timbaland, produced that. Who wrote this? Sia wrote this song for Rihanna. People care about that here, but in Malaysia it's still new. I do the celebrity thing more than the music thing back home, so that's why I prefer being out here to write more music and be creative.

Why do you have such a strong desire to work with Coldplay? You tweeted at them recently asking to collaborate.
Because I'm a huge fan! I went to their concert in Singapore and I was blown away. I had never cried during a show and when I saw them during the Viva La Vida Tour, I cried! I've listened to them from the beginning, and they keep bringing on all these features and they're not me.[Laughs] So why? They had Rihanna, okay fine. Come on, dudes, what about me? They didn't respond to my tweet, so we'll see.

What inspired the sound for Chapters? Did you have a goal going in?
The goal was not to cry and just write. [Laughs] No, I'm kidding. I wanted to write a really good, honest album. I didn't want to hold back at all. For a long time in both my relationships and also musically, I was holding back a little bit. I was listening to everybody and what they wanted me to do. I wanted an album that I could listen to again and again and again. I thought about songs I was listening to, songs I wanted to sing and it was '90s and early 2000s R&B. There are a couple of songs on Chapters that talk about finding a new love, but most of it is about the end of relationships. This is my third album. I'm going to do whatever I want to do.

Usher is featured on "Crush." How was it working with him?
I met Usher two years ago, before I even started working on the album. He wanted to meet up with because he's a huge fan of my song "Coffee." I wasn't writing anything at the time, but told him if I had something, I'd send it over. One year later, I had "Crush" and was listening to a lot of early 2000s R&B. I felt like something was missing on the song and I didn't want to have random R&B singer featured on it. I knew it had to be Usher. We all miss Confessions Usher!
He said yes, we met up, we talked about the song. What he ended up sending to me is what went on the album. He really just gave everything. It was really nice to see someone at that level not just brush it off. I felt like I was this new artist and it was so cool for him to be open to working with me. I haven't been here long enough to be like, 'Hey Usher, do you want to be on this track?' It's just so cool.

You've mentioned that you don't get upset if someone says something offensive about your hijab to you. How did you adopt such a laid back attitude towards it?
I've had the same thing said to me for 10 years now. I learned that even when I'm wearing the traditional hijab people were still saying shit about me, and I've learned that you can't really please people. You can't really shut them up. I'm getting wiser and more mature and I know there's really no point in trying to please other people. It's cliché, but it's still hard to do. You want to be accepted as a person, but when you think about it a little bit you realize it's easier to be laid back.

You can't control other people's actions, only your reactions to them.
I get comments like, 'You're not in Malaysia, you're in America, just be free.' It's so weird because people in Malaysia tell me to cover up, so it's two really different mentalities telling me what to do. I'm in the middle and I'm not listening to either of you. This is the West telling me to do this. The Malaysians are telling me to do that. I'm not them. I'm me. It's much easier to stand your ground and do your own thing.

Yuna's Chapters is out now. Catch her on tour in a city near you here.