Lyra is fast making a name for herself with her unique blend of dark electronic pop. She recently sold out headline shows in London and Dublin, as well as supporting artists including Jess Glynne, Dermot Kennedy and James Bay.

The Irish born artist is set to embark on her first ever world virtual tour presented by Live Nation. We caught up with her to chat about her musical background and recent life before she ‘performs’.

Hi, Lyra! Congrats on your sold-out headline show at The Academy Dublin in March! How was the show and crowd?

Thank you! The show was amazing, but the crowd were even better, they made it so special for me. I couldn’t believe how fast the show sold out – it was quite overwhelming to hear so many people singing along to my songs! It truly is a night I will never forget - I’m still having to punch myself to think I sold out my whole Irish tour. I can’t wait to do it all over again! 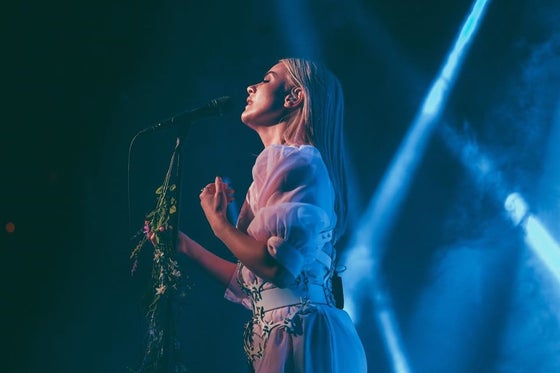 What have you been up to these days? How does your day in social distancing normally look like?

Thankfully I’ve managed to keep a similar routine, I’d start my day with a Barry’s Tea, head for a walk with the dog in the fields – then it’s in to my man-made studio for the day, writing or recording. Then I’d spend the afternoon or evening with my family, or facetiming friends!

I was scheduled to appear on some of the biggest festivals in the UK and Europe which I was obviously extremely excited about! But unfortunately due to the current situation, these plans have been put on hold. Luckily, the Live Nation Virtual Tour has given me a great opportunity to share my music all over the world. It’s always been a dream of mine to perform outside of Ireland – so I’m delighted to be able to perform in Asia…Even if it is from my sofa!

Now tell us more about your musical background. What first got you into music?

My sister has always been a massive influence in my life, she also sang at a young age, so being the younger sister I just wanted to copy exactly what she was doing! From there, all I wanted to do was perform – whether that be in the front room or on stage!

Who is your biggest music influence?

I’ve grown up listening to various artists and music, but someone that has always stuck out for me is Enya – her style is so creative and her melodies and harmonies really portray the story she is trying to tell – which is something I can relate too. I also found out she lives in a castle, which is just seriously cool!

We love your latest single ‘Mother’. What is the story behind it?

Well, it was inspired from my younger years when I received a lot of negative comments about my voice, some would say it was “too loud”, or I couldn’t pronounce my “THs” properly – although I’m not sure what they were expecting considering I’m Irish!

These comments made me very insecure, my mum knew it was upsetting me, and one day she told me that I needed to be proud of who I am, I had to rise above it all, reach for the stars, be true to myself and create my own destiny. So I guess these words have always stuck with me throughout my career, and it was time I wrote about it, hoping to inspire others to do that same.

We have a difficult question for you! What is the favourite track you have released so far and why?

This is a tough one! As all of my songs have true meaning and stories behind them – but I’d say my favourite is ‘Emerald’ – which is the first song I ever released! It’s about my grandmother who always gave me the best advice, I wrote the song to show her the strength she gave me and that everything will be ok. She meant the absolute world to me, and I wanted to share that with the world.

We know you supported artists like Jess Glynne, Dermot Kennedy and James Bay. What was it like working with these artists?

It was an amazing experience – supporting these artists and being able to perform in bigger venues and in front of larger crowds is very motivating for me, it only inspires me to keep working hard, so one day I can be the one headlining.

Which artist would you like to collaborate with and why?

I have a list as long as my arm for this, but I’d have to go with Hozier, his musical talent is just on another level and I think I’d learn so much from him. Another one would be Sia, I love the power in her voice and I think we have some similarities, which could produce some serious sounds!

I’d describe my music as Dark electric pop with a touch of Tribal Drums – inspired by River Dance!

We know you are bringing your Virtual Tour to us soon. That’s amazing! What should people expect? Any special message to people who will be watching the performance?

As I mentioned earlier, I’ve always wanted to perform outside of Ireland – so I’m VERY excited to be able to share my music with you guys. I really hope you enjoy it and I’d like to thank everyone who tunes in – hopefully in the near future I can be there to thank you guys in person!

Catch Lyra live in action on Live From Home: