Metallica are bringing their Hardwired... To Self-Destruct album all over the globe on their WorldWired Tour. While North America gets the hard-rock foursome starting in May, Metallica announced on Thursday (March 16) that they're extending the tour to Europe with new tour dates starting in September.

"Immediately following our run of shows opening the new Royal Arena in Copenhagen last month we promised we would be back to Europe this year... and we will!!" Metallica said in their tour announcement.

The European leg of the WorldWired Tour starts with two nights at the Ziggo Dome in Amsterdam on Sept. 4 and 6. They'll move onto Germany, France, U.K., Spain, Italy, Sweden and more, before ending the leg with two nights in the Hartwell Arena in Helsinki, Finland, on May 9 and 11, 2018.

Norwegian heavy metal band Kvelertak will open for Metallica on this jaunt. 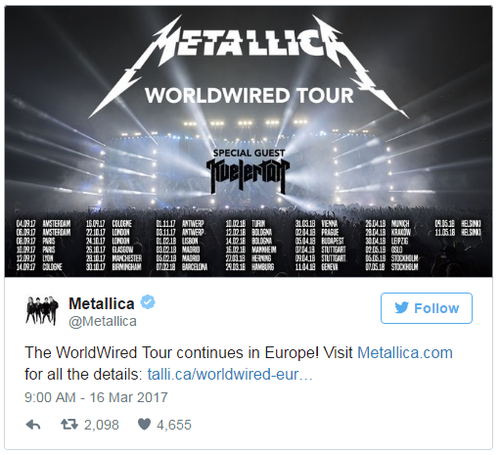 Here are the dates for Metallica's WorldWired Tour in Europe this fall: