THE WEEKND ANNOUNCES 2017 TOUR DATES IN SUPPORT OF NEW ALBUM

The Weeknd is making his 2016 as memorable as his 2015. With the announcement of a new album Starboy, dropping on November 25, and two new singles, it's no surprise a tour announcemnet has followed. His Starboy: Legend of the Fall tour kicks off in February 2017 in Vancouver. This singer has referred to it as "Phase One" meaning there is a very good chance there will be a "Phase Two" with even more dates to come! 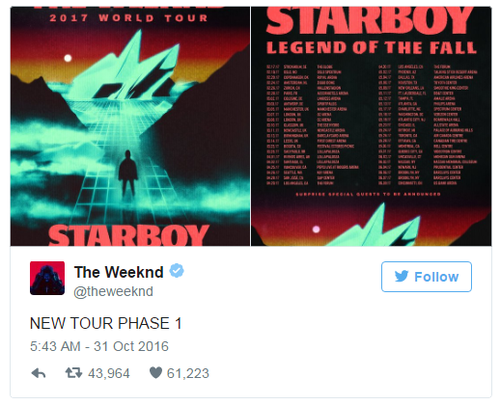 The Weeknd came out of nowhere with his number one sophomore album Beauty Behind the Madness in 2015. That album produced two chart-topping singles, "I Can't Feel My Face" and "The Hills," which you've undoubtedly heard if you've been anywhere near a radio in the last two years. You can check out his tour dates below!

Topics : The Weeknd , Tour , News , Starboy , Legend Of The Fall