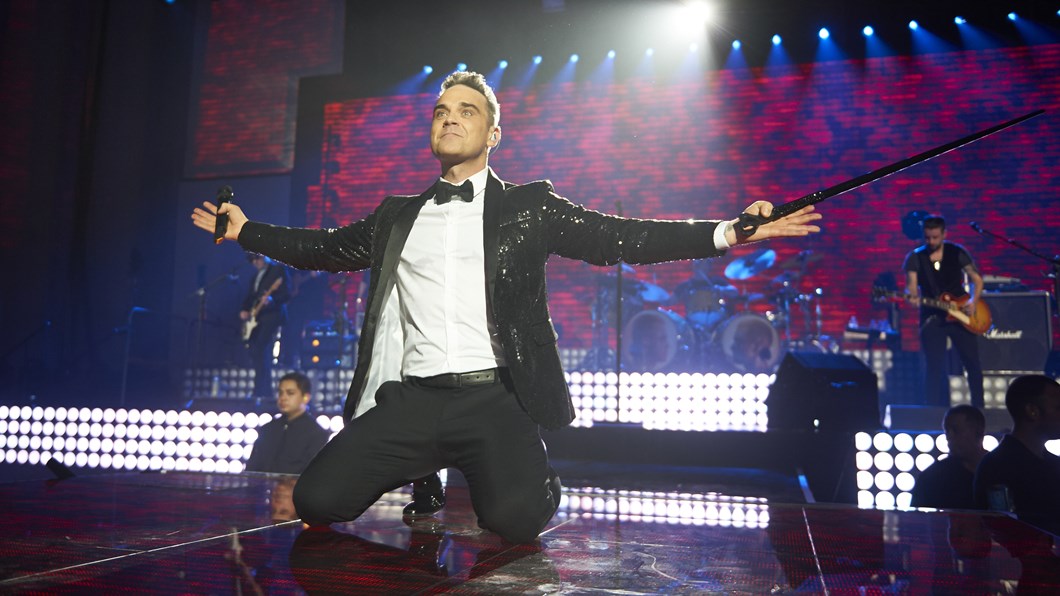 ----CHANGE----How do you sum up Robbie Williams? Ex-Take That man-come solo king? Cheeky chap from Stoke who made it big? Or something else entirely?

In our eyes, Robbie is THE entertainer of a generation. With a back-catalogue of cold, hard hits as long as the M4 and a career that dates back to nineteen-flipping-ninety, picking his very finest performances is no easy task. But we spent the weekend whittling down our faves to just seven that show why Robbie is a Master Of Ceremonies like no other. Ready? Let's begin. ----CHANGE----

7. 'Rock DJ' live in Minsk (2015)
Upon its release back in 2000, 'Rock DJ' polarised Robbie's fanbase - in part for his half-spoken, half-sung delivery, but also because of that X-rated video - but nowadays, it's one of his most recogniaable and much-loved hits. Just take a look at how that Russian crowd reacts in 2015 below! Altogether now: "When I rock the mic, I rock the mic..."

6. 'Heavy Entertainment Show Medley', BRITs Awards (2017)
This year saw Robbie joining the elite crew of BRITs Icon Awards winners that previously consisted of just, err, David Bowie and Elton John. As part-and-parcel of accepting the prestigious award, Robbie strode out with his full Heavy Entertainment Show cast to perform an absolutely storming medley of the latest album's hottest tunes. How, please tell us, is a man nearly 30 years into his career STILL churning out bangers like 'Party Like A Russian' and 'I Love My Life'? Anyone?!

5. 'Kids' live in Manchester with Kyle Minogue (2000)
What happens when you take two of the world's biggest, most recognisable faces, and throw 'em together for one hell of a love duet? You get 'Kids', and when Kylie joined Robbie onstage in Manchester back in 2011 for this rendition of their wedding party staple, it was SPECTACULAR.

4. 'Back For Good' Live In Your Living Room (1998)
Alright, we're really throwing it back for this one, and it's not even really a Robbie Williams song. But back in 1998, riding off the successes of 'Let Me Entertain You' and 'Angels', Robbie filmed his show at London's Forum for his 'Live In Your Living Room' DVD. And when he decided to pay homage to his Take That days, well, watch below to see what happened...

3. 'My Way' live at the Albert Hall (2001)
'Swing When Your Winning' was Robbie's fourth album, and showcased a tender side of the pop hellraiser that he'd later revisit in 2013 with 'Swing Both Ways'. Taking on the challenge of reworking a whole host of swing classics and STILL doing them justice, it was his take on Frank Sinatra's 'My Way' that really showed what this boy from Stoke can do.

2. 'Angels', BRITs Icon Show (2016)
As part of his BRITs Icon Award, Robbie treated a select group of fans to an intimate show of celebration at London's Troxy in December last year. And, like most Robbie live shows, it was 'Angels' that provided one of the evening's most poignant and moving moments. Here it is in all its singalong glory.

1. 'Let Me Entertain You', Live At Knebworth (2003)
Well... it had to be. 'Let Me Entertain You' is a song as familiar to the public in London as it is in Lahore, and THOSE Knebworth shows in 2003 were a pivotal moment for Robbie; they showed that one man still has the power to command a field in Milton Keynes 60,000 strong just exactly as he pleases, two nights over.

Think we got it all wrong? Join the debate on Twitter!

And if you want some Robbie action in the flesh, do yourself a favour and get along to one of his massive Heavy Entertainment Show live dates this summer:

Tickets are available now from the link below.