HOZIER performs his new single "Almost" on The Late Show with Stephen Colbert.

On Tuesday night HOZIER performed his new single "Almost" live on The Late Show with Stephen Colbert. The finger snapping tune in which Hozier says "he pays homage to some all-time jazz greats".

“Tell me who, and I'll be thanking them/ The numbered lovers of Duke Ellington/Do I owe each kiss to lip and cheek as soft as Chet can sing/ Let's get lost and let the good times roll/ Let smoke rings from this paper doll,” Hozier sang. 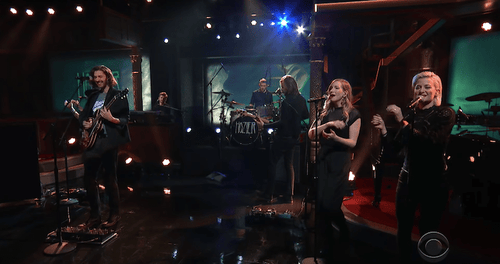 Watch Hozier’s performance of “Almost” on The Late Show and check out the new video below.

Hozier plays his only headline show in New Zealand at Spark Arena in Auckland on Sunday April 28.

Get your tickets HERE!