Didirri curates a mixtape ahead of debut NZ tour!

Didirri is set to make his debut in New Zealand this weekend, performing at Auckland’s Tuning Fork on Friday night and Wellington’s Caroline on Saturday night - marking his first ever headline shows in our country after opening for Vance Joy last year.

The Australian singer-songwriter will perform tracks from his debut EP, ‘Measurements’, and has spent the past few years performing at overseas festivals including SXSW, The Great Escape, Primavera Sound, Splendour In The Grass, a tour on which he sold out his first ever London show at The Shacklewell Arms, and a sold-out headline tour of his home country.

Ahead of the two shows this weekend, we asked the songsmith to put together some of his favourite songs at the moment - check them out below…

1. Opposite Soul by David Bazan
“I love it when a performer stops using metaphor and starts talking as it is. This is a scolding review of a personality that clashes with Davids”

2. Man Of The Universe by the Teskey Brothers
“Just perfection. An incredible voice coupled with some amazing production that throws you back in the best way possible.”

3. Joyride by Adam Melchor
“Serene storytelling from start to the end. Triumphant in its defeat.”

4. Honey by Drugdealer
“Weyes Blood does the Beatles. What more could you want?”

5. Tell Me by Mia Dyson
“Probably the best guitarist to come out of Australia.”

6. Lippy Kids by Elbow
“Floating and forever building, Elbow at their best in my opinion.”

7. Crumb Kitchen by Forever Son
“This is how I want all backing vocals to sound. He paints such a picture of his surroundings as well nailing the production.”

8.     It’s Never Ok by Sarah Mary Chadwick
“Devastating, like someone took a rock ballad and made it real. A conversation that we’ve all had about not hiding your light under a bushel”

9.    Good Girl By Kat Edwards
“Captivating, haunting and just generally bad ass. Those melodies that just feel like they already have existed.” 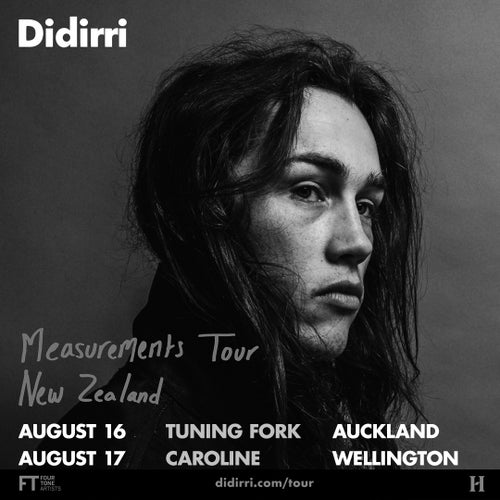 Get tickets to Didirri’s NZ show below!