Today is release day for Michael Ball & Alfie Boe's 'Together Again', and to mark it, the two fine men are doing something a little bit wild.

It's not since the 90s that acts used to hit the road on release day for in-store signings across the country, and we miss it. Don't you? Thankfully, Ball & Boe are reviving the tradition today, and trying their best to a break world record while they're at it!

If all goes to plan, they'll be hitting five (yes, FIVE!) HMVs across the country for in-store signings... and if they actually make it through the day, they'll be world record holders. Want to get involved on the action? Get yourself down to one of the following HMVs at the designated time... 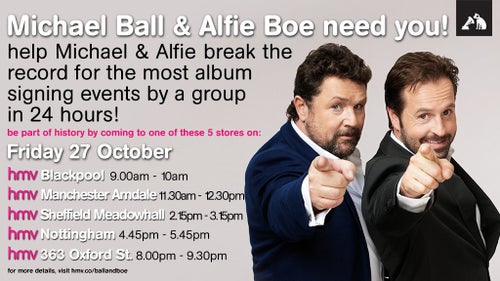 And you can check in on all the fun via their official Twitter moment (which will be updated as the day progresses)...

If THAT'S not enough B&B action for you, ITV1 will be screening a one-hour live special this Sunday at 9pm!

Excited to announce another #BallAndBoe Special on @ITV! Apply to be in the â€œBall and Boe Back Togetherâ€ audience âž¡ï¸ https://t.co/KdV5FPPOCh pic.twitter.com/1H8sovRR2G

Michael Ball and Alfie Boe will hit the road with their Together Again tour this winter. Come along to one of the following for a fabulous night out...and remember to get your copy of 'Together Again' as it's available TODAY!

Book your tickets from the link below!