Big news, fans of laughing (which should be everyone): The Midnight Beast have confirmed they're set to appear at this year's Edinburgh Festival Fringe all month long this August!

The London-based comedy/pop/satire trio will bring their new show All Killer: A Musical Comedy Horror to the Pleasance King Dome every night at 8.30pm (with the exception of Tuesday, 15th August). 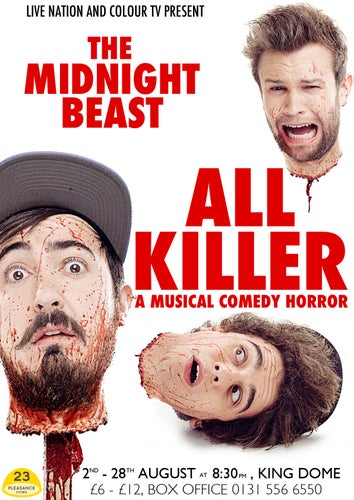 and, yeah, probably some of this...

...it won't be there. All Killer is a brand new show silly! But we guarantee if you're a fan of the Beast's previous work, you're gonna LOVE this. Tickets for their Edinburgh Festival Fringe run are on sale now.

That's not all, though! We've got LOADS of hilarious acts performing at this year's Edinburgh Festival Fringe. Cast your eyes over this year's jolly mob below:

WHAT'S THE SHOW? Brennan Reece: Everlong
WHERE? Pleasance Beside
WHEN? 6pm everyday (except 28th August)
TICKETS

WHAT'S THE SHOW? Grainne Maguire: Gráinne with a Fada
WHERE? Gilded Balloon Turret
WHEN? 6.30pm everyday (except 15th August)
TICKETS

WHAT'S THE SHOW? Josh Pugh: A Boy Named Pugh
WHERE? Peasance Bunker One
WHEN? 7.15pm everyday (except 15th August)
TICKETS

WHAT'S THE SHOW? Chris Turner: What A Time To Be Alive
WHERE? Pleasance Upstairs
WHEN? 9.45pm everyday (except 28th April)
TICKETS

Start booking your tickets now and we'll see you at the Fringe!