Still hunting for the perfect gift to ensure you’re considered the favourite child when Mother’s Day comes along? We’ve got you covered...

Treat your mum to a magical summer evening, listening to the iconic music of Downton Abbey in the grounds of Highclere Castle, Hampshire – the home of the show! Beloved butler Mr. Carson, will join you to reflect on his time at Downton Abbey. His stories will be brought to life by clips from the show with The Chamber Orchestra of London performing songs from the beautiful soundtrack. Top class!

If your mum is a theatre fanatic, grab her tickets to see Michael Ball OBE on his Coming Home To You Tour, starting in April!

Get her the present of her dreams! The Mac are back with two London shows at Wembley Stadium in June.

Treat your mum to Maggie May this Mother’s Day with a pair of tickets to see Rod Stewart Live In Concert from May to December! 🕺

If your mum is the queen of your heart ❤️ surprise her with tickets to see Westlife perform all of their Number 1 hits on The Twenty Tour from May to July!

As you’ve most likely heard, Backstreet’s back. Alright? If nobody is more excited about this than your mum, make her summer and surprise her with tickets to their UK tour happening in June.

If you’re Under Pressure to find a Mother’s Day gift that’s A Kind Of Magic, look no further than a pair of tickets to see Keane frontman Tom Chaplin performing the greatest hits of Queen for BBC Radio 2’s Friday Night Is Music Night this April!

The piano man is playing a HUGE show at Wembley Stadium on Saturday 22nd July 🎹 If your mum’s go-to karaoke tune is Uptown Girl, this would make the perfect present.

Make sure your mum has a nice day when 31st March comes around. Get her tickets to see one of the greatest rock bands of all time! Bon Jovi will tour the UK in June 🎸

If your mumma is a brosette, treat her with tickets to see Matt and Luke for one night only on Friday 5th July at O2 Brixton Academy! Such an intimate show is rare for the duo - this is one she won’t want to miss 😍

After selling out SSE Arena, Wembley in no time at all, another London date was added to Xtina’s UK tour in November! Christina hasn’t played in the UK in 13 years 😲 So we can tell this is going to be something pretty special! Grab tickets.

Do you flippin’ love your mum? Then take her to see Cirque Du Soleil’s exhilarating show Toruk, inspired by Avatar. It’s going to be out of this world!

Make sure she takes it easy on Mother’s Day! And if she’s a classic rock fan, surprise her with tickets to see Eagles on their UK tour this summer 🎁

With electrifying traditional dance and music, plus exciting new tricks up the show’s sleeve, the 25th anniversary of Riverdance is a production your mum will never forget! 🍀

Multi-talented Imelda May will star in An Evening Of Celtic Soul for BBC Radio 2’s Friday Night Is Music Night. Grab tickets and take your mum out to hear the songs of Van Morrison, U2, The Chieftains and more at The London Palladium on 6th May!

Soulful songstress Beverley Knight is performing the music of legend Stevie Wonder at BBC Radio 2’s Friday Night Is Music Night this October. Treat your mum to an unforgettable show!

If your mum is part of Mr Mayer’s dedicated fan base, get her a pair of tickets for his shows in Manchester or London in October.

Olly sure knows how to put on a brilliant show. Make your mum’s heart skip a beat when she realises she’s seeing Mr Murs on his UK tour, kicking off in May!

What better gift could there be than to hear from one of the most inspirational women on the planet?! Becoming: An Intimate Conversation With Michelle Obama comes to The O2 in April.

Does your mother think Newton Faulkner is folking fantastic? Then make her smile with tickets to his UK tour starting in April 🙏

Gift your mum the chance to see not one, but TWO musical legends live with tickets to Sting & Shaggy’s 44/876 tour this May!

Sounds Of The 60s Live

BBC Radio 2’s popular Sounds Of The 60s series is hitting the road with a brand live show hosted by the legendary Tony Blackburn! Take your mum out to dance the night away to the magical music of this incredible era. 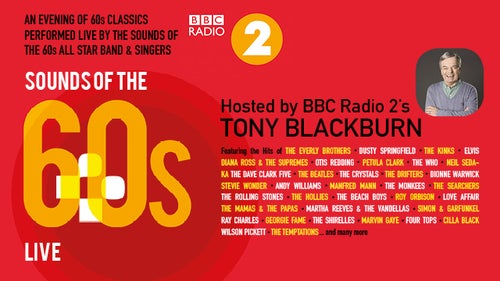 For some more gift ideas, hit the red button below 👇