Following the trio of records that turned them from underground heroes to breakout stars, “All Distortions Are Intentional”, the latest album from Welsh quintet Neck Deep, is out today (24th July) available at neckdeepmerch.com! Fans are invited to a listening party with the band on their Twitch channel tonight 🎧🎉

The latest release is the biggest and boldest step in the creative evolution of Neck Deep, described as ‘an immersive experience from start to finish’. Ahead of the album, the band unveiled new videos for ‘Sick Joke’ and ‘I Revolve (Around You)’, both pop-punk powered bangers that have been enthusiastically received by fans.

“All Distortions Are Intentional” leans hard into the storytelling tropes of classic rock, the attitude of vintage punk and a healthy dose of modern, heavy crunch with renewed vigour and purpose. Unrestrained by preconceived notions of subgenre, Neck Deep have built a mountain on their remarkable foundations, with new tracks like “Lowlife”, “Fall”, and “When You Know” as readymade for singalongs in sweaty clubs and open-air festivals as they are for long car rides and late nights.

The Wrexham alternative rockers have announced a series of intimate in-store acoustic performances, Q&As and album signings in November 👇 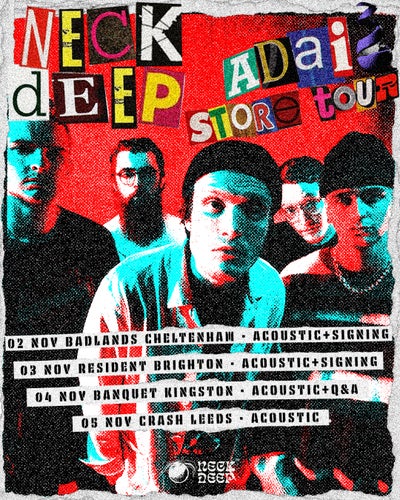