There are SO many great heavy UK bands emerging right now that it's hard to keep up.

One of 'em, Blood Youth, hits the road this week for their first proper headline tour. Put it this way: if you like your hardcore with a positive message, these guys should be your new favourite band. We caught up with vocalist Kaya Tarsus to get their story so far...

HELL KAYA! FOR THOSE THAT DON’T KNOW, WHAT’S THE BLOOD YOUTH STORY SO FAR?

"We’ve only been going just over a year; we’re based in Harrogate, a small town just outside Leeds. Chris, Sam and I grew up there and I’ve always known Chris. In 2014 I was living in Barcelona, working in an office, doing nothing to do with music (I had when I was younger but I was sick of playing in bars to zero people) when I got a call from Chris: 'We’re gonna put together this band called Blood Youth, nothing’s going to happen until 2015 but would you come back for auditions and be in the band?' So I quit my job in Barcelona and have been doing that ever since!" 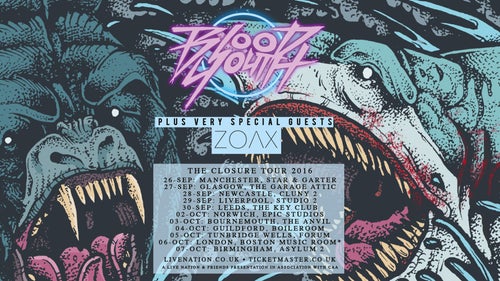 "Yeah! The band came from members of Climates, which was coming to the end. Nobody wanted to quit, so they thought let’s start something new, let’s turn Climates into something more positive – a brand new band. My actual audition was the last Climates tour, which was the fourth European tour – and I’d never been on tour before. So I went from working in an office to playing in Croatia. It was pretty mad."

HOW DOES IT FEEL TO BE HEADING OUT ON YOUR FIRST HEADLINE TOUR?

"In the past, we’ve supported Architects, Beartooth, Every Time I Die – some really sick bands – and we’re really proud that now people want to buy tickets to come and see us and sing some songs. We just want everyone to have a good show and we’re all really excited."

DO YOU THINK THE TOUR WILL BE A TEST OF THE ENDURANCE FOR THE BAND? IT’S A PRETTY LONG RUN...

"I'd like to say we’re pretty close and very used to each other… but call me again in three weeks time when my hair’s all fallen out!"

WHAT ARE BLOOD YOUTH SHOWS LIKE? WHAT CAN PEOPLE EXPECT?

"Without sounding cheesy, we call our sound 'positive aggression'. it’s aggressive music but there’s a really positive message behind it. We hope people will come to the shows and be really pumped and psyched and leave feeling positive."

"I used to go to so many hardcore shows and everybody would come away thinking 'life is bullsh*t'. We do have sad songs but we the message is 'I’m better now”.

SO WE’VE HEARD YOU’RE PLAYING SOME NEW SONGS ON THE TOUR, WHAT CAN YOU TELL US ABOUT THEM?

"These new songs are Blood Youth 2.0. We’ve had two EPs worth of feedback and we’ve taken that and catered to our own and everyone’s needs."

YOU’VE GOT ZOAX COMING OUT WITH YOU – WHY SHOULD PEOPLE COME DOWN EARLY TO SEE THEM?

"We listen to every band that comes out with us and we saw Zoax live and thought they were sick – they remind me of an early Biffy Clyro. We’ve got Cope coming out with us for the London show too, and we chose them because we really like the sound."

YOU SOUND VERY RELAXED ABOUT EVERYTHING RIGHT NOW...

"We’ve proven ourselves with two EPs and we’re just taking it as it comes. We’ve learnt in this industry you can’t plan too far ahead. We definitely have our sights set high; we just want it to happen naturally. That’s us as a band – we’re just very chill!"

Blood Youth and Zoax hit the road together like, THIS WEEK! Get down to a show and bang yer head.

Book your tickets now by clicking on the big red button below!