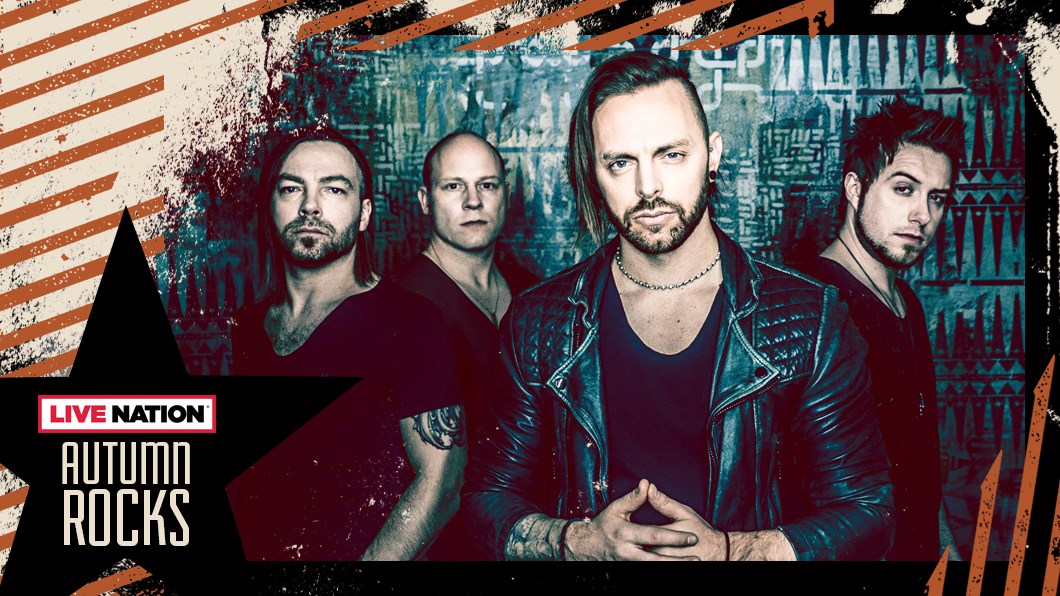 Autumn Rocks! 23 Acts Bringing The Heavy As The Months Get Colder

Let's face it, summer is officially over and we're all suffering the post festival blues.

Are you sat there wishing you were back in a festival field? Well, we have some good news! A ton of your fave rock acts are hitting the road this autumn to keep you moshing as the months get colder. Check out some of our must-see shows below 👇

WHO: Black Stone Cherry are a Kentucky-based rock n' roll quartet who you might recognise from their epic main stage performance at this year's Download Festival. This winter they'll be hitting the road with EPIC special guests The Cadillac Three and Monster Truck!

WHEN & WHERE: Cardiff, Newcastle, Glasgow, Manchester, Birmingham, Leeds and London in December 2018!

WHO: Brothers Osborne are a GRAMMY nominated and mega talented duo consisting of brothers TJ and John. Their sound blends together country and rock to create some of the freshest, most unique music to come out of Nashville in recent years.

WHEN & WHERE: Glasgow, Newcastle, Manchester, Nottingham and London in November/December 2018!

Bullet For My Valentine

WHO: Hailed as one of the biggest British metal acts in music history, Bullet For My Valentine are a heavy metal outfit from Cardiff who have sold millions of albums worldwide, won SIX Kerrang! Awards and have toured with legends such as Iron Maiden and Metallica.

WHEN & WHERE: London and Cardiff in November 2018!

WHO: Nightwish are the undisputed pioneers of symphonic metal and the gods of the whole genre. This December the icons will head out on their first UK headline tour in SIX years, so you definitely don't want to miss it.

WHEN & WHERE: London, Birmingham and Manchester in December 2018!

Bring Me The Horizon

WHO: BMTH are a Sheffield based, multi-platinum selling metal band fronted by the one and only Oli Sykes. Since forming in 2004, their sound has evolved from primarily deathcore to a more eclectic style of metalcore.

WHEN & WHERE: Birmingham, Leeds, Glasgow, Cardiff and London in November 2018!

WHO: Slayer are one of the most distinctive, influential and extreme metal bands of all time. The thrash metal legends have released 12 studio albums, won countless awards including two GRAMMYs, played nearly 3000 concerts across the globe and will this year head out on one final world tour.

WHEN & WHERE: London, Cardiff, Birmingham, Manchester, Newcastle and Glasgow in November 2018!

WHO: Graveyard are a hard rock group inspired by the likes of Cream and Black Sabbath. Since forming in Sweden in 2006, the band have released five studio albums including 2018's 'Peace'.

WHEN & WHERE: London, Manchester and Birmingham in December 2018!

WHEN & WHERE: Birmingham, Manchester, Cardiff and London in October/November 2018!

WHO: Will Haven are a hard-hitting noise metal outfit from Sacramento, California. This November they'll be returning to the UK for the first time since 2015!

WHEN & WHERE: Manchester and London in November 2018!

WHO: Myrkur, which means 'darkness' in Icelandic, is the one-woman black atmospheric metal project of Danish singer, songwriter and multi-instrumentalist Amalie Bruun.

WHEN & WHERE: London and Manchester in December 2018!

WHO: Devilskin are an alternative metal band from New Zealand who formed in 2004. They released their platinum-selling debut album 'We Rise' in 2014 which reached #1 in New Zealand and remained in the top 40 for 54 WEEKS!

WHO: King 810 are a nu-metal outfit from Michigan who have toured with metal legends Slipknot and Korn. After making their debut UK performance on the Download Freezes Over Tour in September 2014, the band will return to the UK for a huge headline run this autumn.

WHO: American rockers Godsmack have sold over 20 million albums worldwide, won ‘Rock Artist of the Year’ at the Billboard Music Awards and been nominated for FOUR Grammy Awards. The band have just released their seventh studio album ‘When Legends Rise’ and are bringing it across the Atlantic this November for a UK tour!

WHEN & WHERE: Birmingham, Manchester and London in November 2018!

WHO: Over the past eighteen months, Australian outfit Hands Like Houses have solidified their place as one of the most vital up-and-coming rock bands in the world with over 85 million combined streams and 100,000 records sold. The band are currently gearing up to release their highly anticipated fourth studio album ‘-Anon’ which will be supported by a UK October tour!

WHEN & WHERE: Glasgow, Bristol, Manchester and London in October 2018!

Poets Of The Fall

WHO: Six-piece Poets of the Fall have made chart history in their native country of Finland for achieving No.1 positions with their first four albums. With their eighth album ‘Ultraviolet’ set to drop in October, the band are currently gearing up to support it with a 15th anniversary tour!

WHEN & WHERE: Bristol, London, Glasgow, Nottingham and Manchester in October 2018!

WHO: Arriving on the scene in 2016 with much acclaimed debut album ‘Statues’, Brighton newcomers Black Peaks have sold out venues up and down the country and played shows with the likes of Architects, Deftones, System Of A Down and Prophets Of Rage. The four-piece are set to release their sophomore album ‘All That Divides’ on 5th October, with the first material being premiered on the Radio 1 Rock Show in March.

WHEN & WHERE: Glasgow, Manchester and Birmingham in October 2018!

WHO: Fronted by siblings Ewan and Callum, Bad Sounds’ genre-blending sound is the product of the two brother’s rich musical upbringing which encompassed everything from hip-hop, soul, pop and R’n’B. The band have just shared their debut album ‘Get Better' and will support the release with a UK tour this autumn!

WHEN & WHERE: Norwich, London, Glasgow and Liverpool in October/November 2018!

WHO: With twenty-seven years, twelve albums, five EPs and several live recordings under their belt, US four-piece Clutch have built a loyal fanbase by remaining true to their roots in punk, hardcore and rock & roll but being unafraid to expand their sound and lyrics to stay modern. Their latest release ‘Book of Bad Decisions’ landed this month, which they’re supporting with a UK December tour!

WHEN & WHERE: Bristol, Glasgow, Manchester, London and Birmingham in December 2018!

WHO: Purveyors of heavy psychedelia, Cambridge outfit Uncle Acid & The Deadbeats draw from a wide range of influences spanning the likes of The Beatles, Black Sabbath and Charles Manson. With their much anticipated fifth album ‘Wasteland’ set to arrive in October, the band have announced a UK tour for January 2019!

WHEN & WHERE: Leeds, Newcastle, Manchester, Birmingham and London in January 2019!

WHO: San Francisco band Culture Abuse describe themselves as ‘kinda grunge, kinda punk, kinda hardcore, definitely a good time’. Their debut album ‘Peach’ saw them open for Green Day in London and join the bill for Reading and Leeds, and now they’re returning to the UK for a few shows later this year in support of new album ‘Bay Dream’!

WHEN & WHERE: Glasgow, Manchester and London in October 2018!

WHO: State Champs are pop-punk band from New York whose sound is influenced by the likes of Fall Out Boy, New Found Glory and The Story So Far. Having just released their third album ‘Living Proof’, the band are set for a UK tour this October/November, with Seaway, Stand Atlantic and Woes all joining for the ride!

WHEN & WHERE: Glasgow, Manchester, Leeds, Birmingham and Bristol in October/November 2018!

WHO: 19-year-old Yungblud uses his socially conscious, frenetic brand of alt-rock to confront everything from gentrification to addiction. He’s just released his debut album ‘21st Century Liability’, and is set to play his biggest tour to date this March!

WHEN & WHERE: Glasgow, Newcastle, Manchester, Birmingham, Brighton, London and Bristol in March 2019!

WHO: Refusing to be pigeonholed into one genre, CKY serve up a unique mix of post-grunge, hard rock, stoner metal and skate punk. Fresh off the back of supporting Skindred on their UK tour and playing Download Festival, the rockers have announced their own headline winter tour!