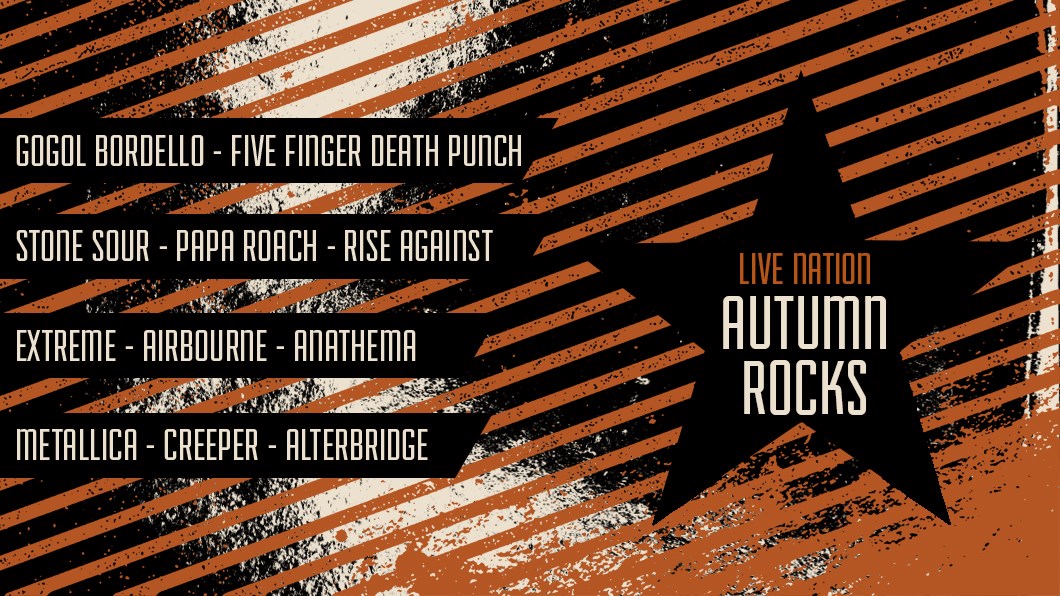 Autumn Rocks! 10 Acts Bringing The Heavy As The Months Get Colder

Face it folks, summer's over. And while that means we won't be spending our weekends in festival fields for a while, it ALSO means we have a buttload of brilliant rock and metal tours just around the corner to keep you moshing 'til Christmas. Feast your eyes and ears on this lot...

WHO? Stone Sour and The Pretty Reckless
WHEN? The UK arena run kicks off in Birmingham on 29th November.
GO SEE 'EM BECAUSE: With 'HYDROGRAD', Stone Sour are on a creative crescendo right now, and the inclusion of Taylor Momsen's The Pretty Reckless on board for the whole run, you've got two A-lister bands for the price of one. Solid!
TICKETS

WHO? Papa Roach
WHEN? The first show is in Birmingham on 5th October
GO SEE 'EM BECAUSE: Papa Roach are certified rock veterans at this point, and every single one of their shows could be a festival headline set. How Jacoby still bounces around the stage with that much energy, we'll never know!
TICKETS

WHO? Rise Against
WHEN? They've got a string of academy dates lined up, kicking off in Birmingham on 1st November.
GO SEE 'EM BECAUSE: Now onto their eighth album 'Wolves', the Chicago punk rockers have earned their name as one of the most reliable live bands in existence. Not to mention, they've got the small matter of Sleeping With Sirens along for the ride, too...
TICKETS

WHO? Five Finger Death Punch
WHEN? The UK arena run kicks off Arena Birmingham on 17th December.
GO SEE 'EM BECAUSE: With In Flames and Of Mice & Men in tow, this is one of the heaviest and diverse tours of 2017. And it's probably one of the last gigs of the year you'll have a chance to see, what with Christmas and everything just around the corner!
TICKETS

WHO? Gogol Bordello
WHEN? Their first show in at Manchester Academy on 12th December
GO SEE 'EM BECAUSE: The Gypsy-punk kings (and queen) have made their name as a hard-touring, hard-partying machine over the last two decades, and if you're yet to experience one of their shows for yourself, you really have been missing out. Expect big singalongs, all manner of theatrics and a few surprises, too.
TICKETS

WHO? Extreme
WHEN? Their first show on UK soil is at O2 Academy Newcastle on 13th December.
GO SEE 'EM BECAUSE: The 'More Than Words' group are hitting the road for the first time since 2014, and judging by their comments when we caught up with them (watch above), they are more than ready.
TICKETS

WHO? Airbourne
WHEN? They're touring for a solid two weeks in November.
GO SEE 'EM BECAUSE: The Aussie rockers are bring their 'Breakin' Outta Hell' tour to UK stages, and trust us when we say this lot know how to throw a party. Expect big riffs, big fist-pumps and more high-octane energy from the Warrnambool natives than you know what to do with!
TICKETS

WHO? Creeper
WHEN? The South Coast horror-punks kick off their extra special run in Glasgow on 3rd December.
GO SEE 'EM BECAUSE: Creeper have been weaving an element of theatre and storytelling into everything they've done over the last few years, and these 'Theatre of Fear' shows are set to be the culmination of all that hard work and vision. If only we could tell you what they've got in store...
TICKETS

WHO? Metallica
WHEN? The WorldWired tour arrives in the UK on 22nd October, for the first of two shows at The O2.
GO SEE 'EM BECAUSE: OH COME ON. It's Metallica. Do we even need to explain?
TICKETS

To stay in the know with all of our rock and metal tours on the horizon, sign up for your FREE My Live Nation account below, and select the 'rock and metal' email updates option. That'll also give you access to all of our #LNpresales, too!