As we enter the new decade, music is being pushed in the most interesting of directions with many artists transcending the boundaries of genre, creating innovative and exciting results! 👇

Where: IAMDDB is heading to Bristol, London, Birmingham, Manchester and Glasgow!

Why: Unapologetic and unwavering in her approach, IAMDDB continues to push boundaries with her powerful take on hip-hop, trap and urban jazz (a genre coined by IAMDDB). Acutely raw and personal across all of her music, her lyrics take on themes such as love, everyday experiences but above all, empowerment! She supported Ms. Lauryn Hill, had a packed out international touring schedule and a coveted place on the Forbes 30 Under 30 list.

Where: Scandal will be heading to our shores to perform one UK show at the O2 Academy Islington on the 'Kiss from the darkness World Tour'.

Why: Formed in 2006 in Kyobashi, Osaka, SCANDAL made their major debut in 2008 with “DOLL.” The following year they won the Best New Artist category in the Japan Record Awards with “Shojo S.” The girls have a huge following at home and abroad performing shows throughout the world. In recent years they’ve also gained attention as fashion icons and as producers of their own clothing line “Feedback!” In 2019 they founded their private label “her.” 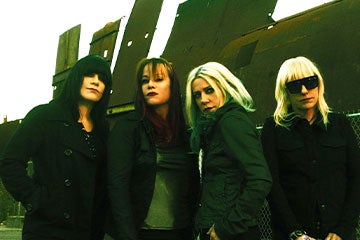 Where: L7 will be heading to the UK to perform in London, Manchester and Glasgow!

Why: L7’s signature sound - a heavy, catchy mix of punk, metal, noise and pop - helped usher in the era of grunge. Since their recording career began in 1987, the band has released six studio albums, three live albums, one covers LP and one greatest hits album on labels including Epitaph, Sup Pop, Slash, and Warner Brothers. In 1991, the band founded Rock for Choice, a pro-choice organisation with the Feminist Majority Foundation. A documentary on the band L7: Pretend We’re Dead was released in 2017 to critical acclaim and demonstrates L7’s contribution and legacy in the pantheon of rock.

Where: Goldfrapp will perform across the UK in Oxford, Manchester, Gateshead, Edinburgh, London, Birmingham, and Bexhill-on-Sea.

Why: With a history spanning over two decades the London duo is a multi-platinum selling band that has been nominated for the Mercury Prize, multiple Grammy Awards and won an Ivor Novello for 'Strict Machine’. Alison Goldfrapp is also an active photographer and photographed all the visuals for the band's latest album 'Silver Eye' herself, as well as directing Goldfrapp's videos for Everything Is Never Enough and Systematic.