We Spent 48 Hours at a Drone Festival in Upstate New York{CHANGE THIS.....}

Few terms evoke a more forbidding archetype of chin-stroking somnolence than drone music: we all know at least one implacable "drone dude" down to talk anyone's ear off about ephemera from the far reaches of Bandcamp's swamps. God bless those guys—our challenging world deserves challenging music—but I still hesitated when I first heard about 24 Hour Drone, an annual event at the Basilica in Hudson, New York.

The event was described as a full day of non-stop drone, promising that "Those who make the commitment to this endurance based, long-duration work will be rewarded with the intangible feeling of meditative contentment, pure bliss, and communal collaboration." I love bliss as much as the next guy—the purer the better—but I'm also a Snapchat-addled millennial with the attention span of a bumblebee. Would my synapses fry thirty seconds into the day's first atonal saxophone solo? Upon closer inspection, though, the lineup was no narrow-minded marathon snoozefest—instead, it featured a broad buffet of experimental music that included vocal choirs, post-rock icons, singing bowls, and Night Slugs pseudonyms. Throwing caution to the wind, I grabbed a few friends and a blanket, and hit the I-95 upstate.

The Basilica Hudson organization—which curates events in the Basilica event space—is the brainchild of filmmaker Tony Stone and musician Melissa Auf De Maur, the latter of whom has played with Hole and Smashing Pumpkins. The pair left New York City for the Hudson area eight years ago, one of a few examples in which the upstate New York town has served as a pressure valve for creative types pushing against the big city's numerous limitations. 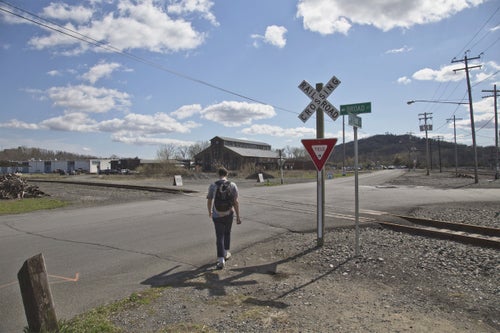 Hudson is home to an absurd number of furniture stores, 88 in total. Some town blocks feature five or six stores lined up in a row, display windows crammed with spiky modern tables jostling for attention with austere, neoclassical busts. In the '90s, when the housing market made SoHo untenable for furniture dealers, they bought old buildings in Hudson and moved en masse—and a similar paradigm motivated Stone and Auf De Maur to begin curating at the Basilica, which was renovated and turned into a performance space in 2000 by artist Patrick Doyle.

"We just wanted more space—and from the window of our house, we saw that beautiful building," Auf De Maur tells me during a phone interview. "We would stare at it and wonder what it was, imagining what we would do with a space like that. We'd literally just trip out at midnight, looking at this glorious building in the winter night. Eventually we said, '24 hours of sound, that's what we need to make there! We're gonna do it!'" 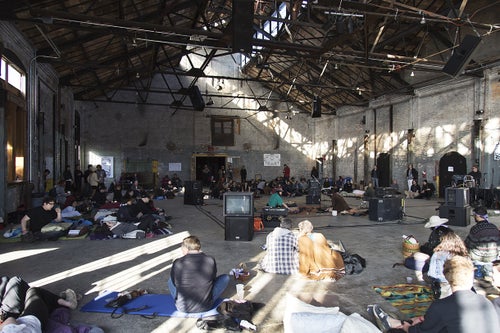 The building—which, true to its name, really does resemble a handsome Catholic basilica, complete with rose windows and a stately nave—dates back to the city's 19th century manufacturing heyday, when it served as a foundry for train wheels and a glue factory. "When you're standing in the Basilica," Auf De Maur explains, "the entire history of America is under your feet. Every wave—from explorers, to industrial revolution, to collapse, and then collapse again, to the end of manufacturing over the last 20 years in the U.S." 24 Hour Drone is one of several recurring events at Basilica, including the annual SoundScape Festival, which has previously featured artists like Perfume Genius and White Lung. "24-Hour Drone is the soul, step-sister, freak-child of SoundScape," said Auf De Maur. "It's not about anything else other than sharing something as abstract as sound. No voices, no words—just sound."

"Drone is a very appealing genre to me," she adds, "because it's so experimental. It works for someone with a classical background or someone who just specializes in gongs. It can be noisy, it can be electronic, but it usually experiments with dragging out sounds and sustaining them."

The drone festival was divided into four programming blocks according to "the rise and fall of the sun": "Invocation," "Dedication," "Purge," and "Prayer." The first block kicked off on Saturday afternoon with Canadian artist Gambletron, who elicited mellow tones from a device described in a press release as a "multi-AM Radio Theremin." Performers sat in the center of the large room surrounded by speakers, the audience reclining on blankets and yoga mats on all sides around them. The room began to fill with a mix of late-twenties beard-stroke types, old school lifer weirdos, and parents with kids—including Björk, who took her brood for a brisk lap around the room. 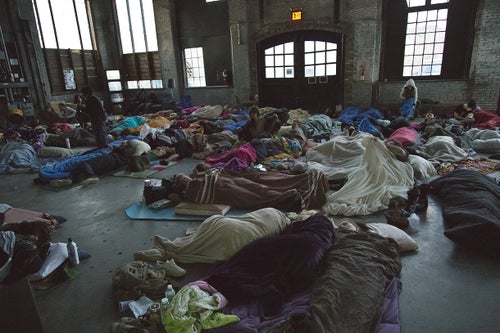 Gambletron was followed by an a cappella vocal quartet led by Arone Dyer of Buke and Gase. As the four singers paced amid the crowd, attendants handed out blindfolds to the audience, their choral harmonies mingling with the sound of pigeons in the rafters. This performance established a theme I'd notice again throughout the festival: performers undermining the audience's spatial sense of the room by disseminating sound from unexpected directions.

As the hours passed, the sonic intensity heightened. The meditative "Invocation" gave way to "Dedication," bringing blackened industrial soundscapes from Godspeed! You Black Emperor's Efrim Manuel Menuck and a masterclass in stark grooves from Brooklyn psych powerhouse Oneida, whose drummer's delicate, brushed strokes gave way to pounding martial rhythms. At this point, almost every inch of the floor was covered in sleeping bags and blankets, resembling a slumber party for several hundred well-behaved middle schoolers.

Midnight came and went, and Hospital Records producers Alberich, Lussuria, and Dual Action laid down sets of glistening ambient noise. At one point, an ambulance pulled up outside a window, bathing the room in strobing red light—a friend joked that Hospital must have rented it as a set piece. We stepped outside for a walk; at a distance, music from the Basilica merged with the faint pulse of train horns across the river. 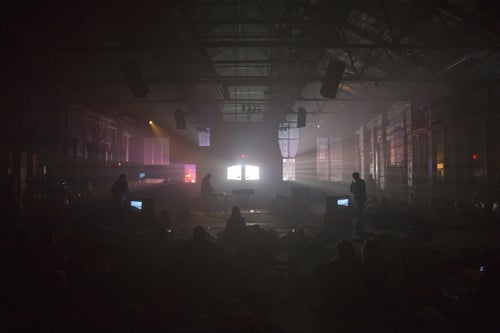 We came back around 3 AM to find the room transformed. Eight poles had been erected in the middle of the floor, crackling with bursts of white light and synced to coruscating electronic melodies pulsing from a nearby box of wires. A young woman was moving along the floor, draped in LED string lights and shiny silver plastic, slowly crawling through the crowd on all fours.

The performance was a collaboration between Ceramic TL—a new project helmed by Egyptrixx, affiliate of UK dance label Night Slugs—and the dance collective Open Fortress. The music intensified as arpeggios lanced through the room, telegraphed visually by the flashing poles. The whole thing sounded like a triangulation of late-2000s genre-mashing troublemakers Salem, noise auteur Pete Swanson, and the forest levels of Donkey Kong. The dancer stood up and began to sway; photographers followed, the cameras adding to the existing flashes. Eventually, she started prancing and tossing herself violently on the ground. The music arced and crested—sometimes abrasive, more often full-tilt gorgeous—and about half of the audience remained awake. The scene looked like a ritual pulled from the Others' playbook on Lost. I felt deeply moved. 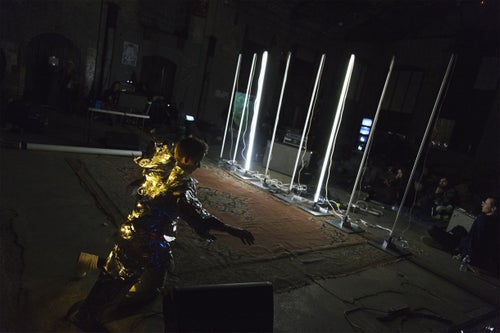 At the time, I made a note to myself about how the performance unsettled expectations about where to look, who was doing what, and where the line between audience-member and participant lay. The entire room felt charged, in play; only the inscrutable poles offered any kind of organizing principle. In a follow-up email, Egyptrixx—nee David Psutka—told me this was on purpose.

"One of the central aims is to reimagine and dismantle the politics of the performance space, and to present the show in a non-focalized way," he wrote. "For us, the essence of the performance is in how it 'lives' in and interacts with the space—the light colliding with structures/viewers, the sound reverberating off of walls/windows, and how Open Fortress negotiates the buildings/crowds."

Next up was a session from the New York ambient duo Long Distance Poison, who unleashed syrup-drip oscillations from a mighty rack of modular synths. The glacial vibe provided a welcome cool-down after the previous maelstrom, and much of the audience drifted off. An hour later, a woman walked by and handed us colorful arm-length tubes. She explained that when a man wearing a cowboy hat raised his left hand, we were to spin our tubes over our head—and when he lowered his hand, we would stop. 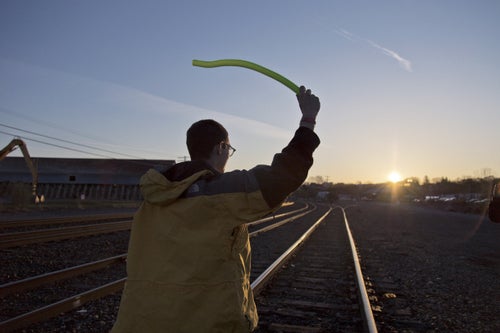 Ten minutes later, the signal appeared, and as we spun our tubes over our heads they emitted a soft whirring tone. About two dozen other people in the audience were also spinning tubes, some synced to the left hand and others to the right. One middle-aged man with waist-length dreadlocks was having the time of his life, spinning his purple tube with such force I thought he might take off into the sky. Everyone's tube produced a different tone, and I eventually realized the man with the cowboy hat was conducting an impromptu orchestra by raising and lowering his hands in sequence.

Audience members began waking up with irked expressions on their faces as they tried to parse the zany spectacle, and the conductor's flapping arms took on a madcap, Chaplin-esque air. Eventually, he produced a massive white tube and paced around the space, whirling it like a lasso—the tubular equivalent of shredding a guitar solo. To be sure, this piece had a distinct energy not unlike something you might find at Burning Man—and it was also another clever play on the audience-performer dynamic, expanding my ideas of what drone music could be without taking itself too seriously. 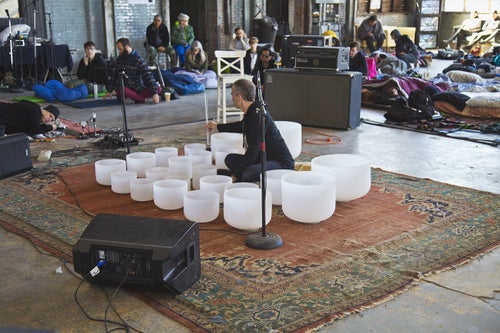 Confession: around 9 AM, as a very tan man stroked elegiac notes from a formidable array of Tibetan singing bowls, I fell asleep. I promise you, I tried to fight it, but the bowls took control. I woke up around 2 PM as Brooklyn-based noise prodigy Dreamcrusher prepared to play the final set of the day. He'd been booked by Pitchfork editor and Tinnitus curator Brandon Stosuy, who explained over email that he wanted to close out the festival with "something dark, playful, and nihilistic...to [shake] people out of the trance." Dreamcrusher plugged in his laptop and unleashed an acid bath of harsh feedback and drill sounds, flecked with melodies that surfaced through the murk like feeding carp. When he was done we wiped our eyes, still dazed, and stumbled into the sunlight. The trance was broken. Mostly. 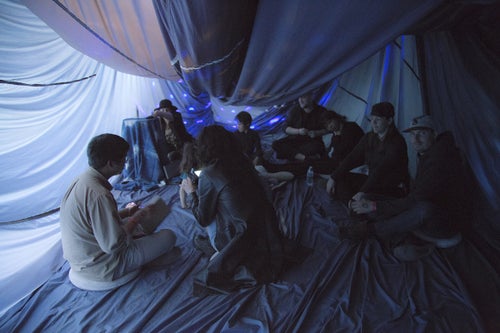 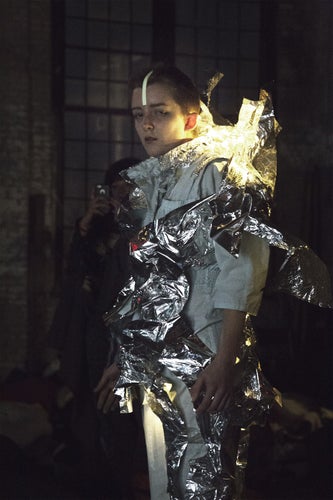 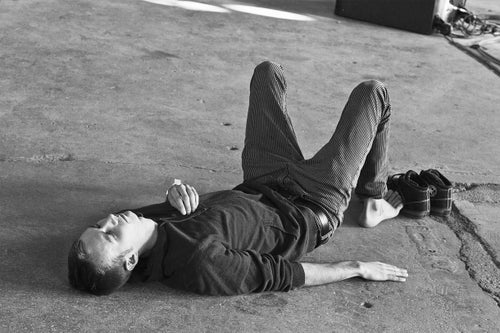 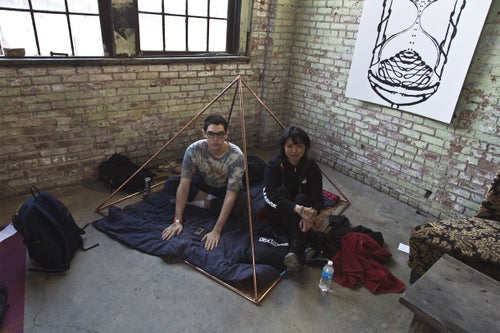 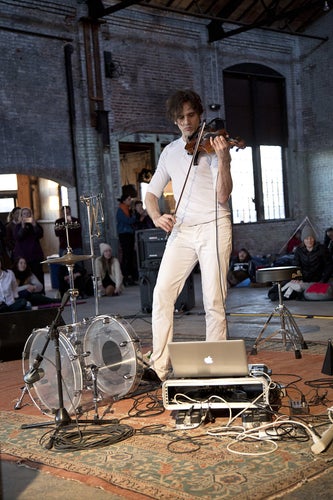 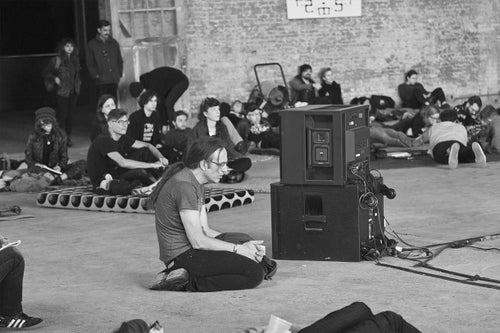 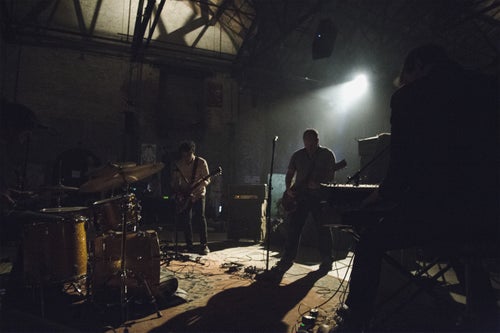