KISS Kicked Off End of the Road Farewell Tour in Vancouver

Last night, hard rock icons Kiss kicked off their very last tour ever at Rogers Arena in Vancouver, BC, marking the end of an era. As promised, the masked rockers put on their most ambitious show, with a whole new, impressive stage set up.

The 20-song setlist is heavy with all their signature classics, making the gig a proper showcase of the band's long, successful career. The sprawling setlist had more songs with the word "rock" in it than you can count.

They kicked off the night by descending from the ceiling on three massive hexagon pods to the tune of "Rock and Roll" by Led Zeppelin. Hydraulic risers on both side of the stage and under the drum kit lifted Eric Singer onto the stage. They went right into "Detroit Rock City" to open up the epic night.

Throughout the set, the rock pros made it hard for their fans to blink. Every inch of the show was visually stimulating, especially thanks to the constant pyro from every angle, and each track they chose for their set was a singalong headbanger. More than half their set came from their first six albums, but there was plenty of show from their '80s era too.

Halfway into the set, Tommy Thayer and Gene Simmons propelled into the sky as Paul Stanley attempted his classic "100,000 Years" rap. Stanley later flew over the crowd as they performed "Love Gun" and "I Was Made for Lovin' You."

For the encore, Singer opened it up by taking over a sparkling piano, which rose from the ground, and performed "Beth." They ended the road in Vancouver with Simmons and Thayer on two gigantic cranes reaching over the venue while performing the timeless anthem "Rock and Roll All Nite." 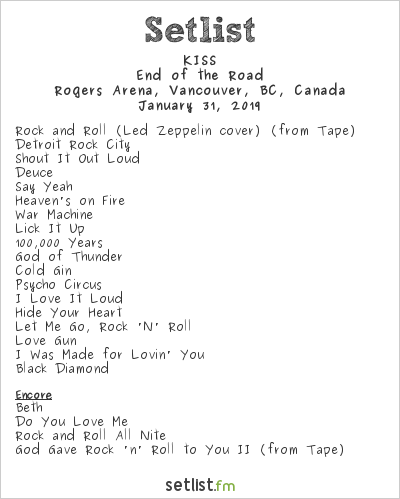 There was no lengthy goodbye speech by the foursome, just some thank you's and tributes by way of montages and collages of videos and photos from throughout the group's history.

Make sure to catch the NYC legends while you have the chance, because it'll be the last time! Tour dates are mapped out below.

Kiss, The End of the Road Farewell Tour – International Leg