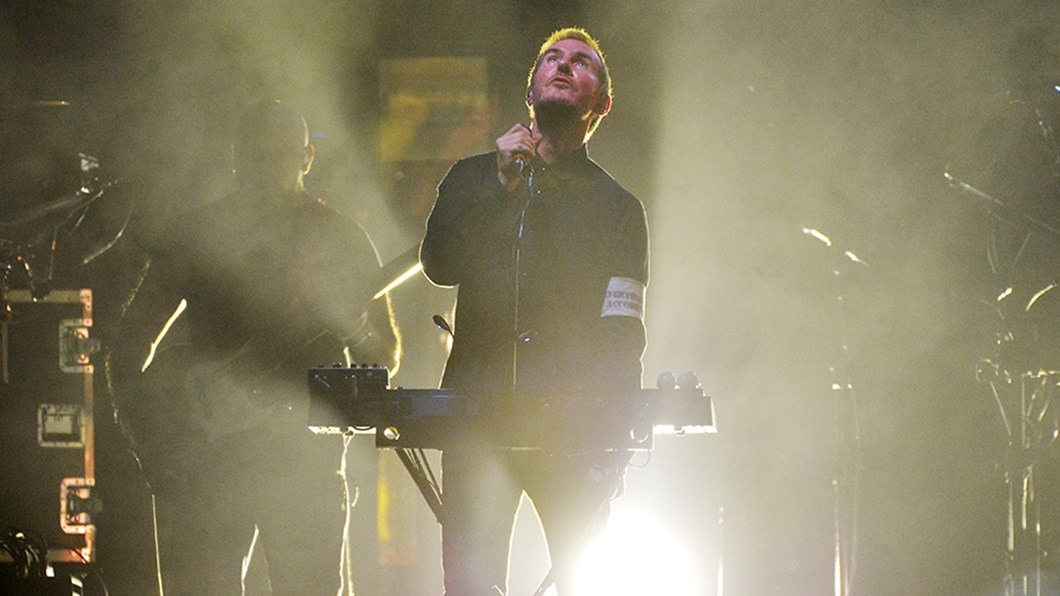 Such an approach was abundantly evident by the fact that the album – just like previous full-length 100th Window (2003) – featured a myriad of collaborations with other musicians and abandoned the practice of sampling, which permeated the trip-hop pioneers’ earlier releases, including 1998’s Mezzanine. For that globally heralded album’s 20th anniversary tour (dubbed “Mezzanine XXI” since it commenced one year later), the group has continued in that mindset; on the final date (March 2) of the jaunt’s European leg in Massive Attack’s hometown of Bristol – under cover of a hangar-like tent specially constructed to house 14,000 people at the steel yard of Filton Airfield, which hosted military airplane production during both World Wars – the band staged a visually and sonically stunning deconstruction of the album in-full.

That’s to say: yes, they offered up each of the record’s songs throughout the 2-hour performance, but in a manner that undermined expectations hinging on notions of nostalgia and entitlement – there was no encore of other album favorites and the track listing was played largely out of order, interspersed with seven covers.

The concert commenced with one of those, the Velvet Underground’s “I Found a Reason,” its lofty lilt juxtaposed with digital renderings of a futuristic Bristol and video clips of former British prime minister Tony Blair, Saddam Hussein, Queen Elizabeth II and Britney Spears at the mercy of paparazzi in full-meltdown mode. The inclusion was no coincidence seeing as following selection “Risingson” – preceded by the first of many subversive text bits: “Once upon a time … the data was going to make you free …” – samples the Lou Reed-penned cut.

The song also features bits of Pete Seeger’s “Where Have All the Flowers Gone?,” which the band tackled later (between a pulsing, pounding “Dissolved Girl” and plentifully percussive “Inertia Creeps” updated with boo-inducing Trump-era imagery) with vocal assistance from Elizabeth Fraser. The Cocteau Twins singer likewise reprised her roles on dub-heavy deep cut “Black Milk” (which cropped up early after curious pairing of the Cure’s jangly “10:15 Saturday Night” and mainstay contributor Horace Andy’s take on “Man Next Door”) and the ever-transcendent “Teardrop” (saved for the third-to-last spot).

Other covers – Bauhaus’s “Bela Lugosi’s Dead,” Andy’s “See A Man’s Face” (sampled throughout prior album track “Exchange”), Ultravox’s “Rockwrok” and Aviici’s “Levels” – read as nods to influencers and served as vehicles for further socio-political and cultural commentary scrolling across the backdrop screens, respectively: “The past filled our vision … and began to blot out the future”; “Euphoria may or may not exist … it was the illuminati … or M(ouse) K(ontrol) Ultra”; and “The logic of time and space began to disappear... the dead live among us … they still dance … they still sing … they will not let us go.” 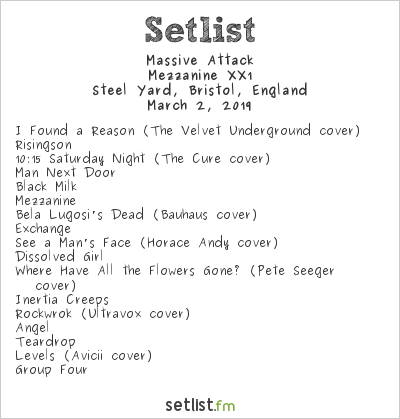 All of it culminated into the Fraser-led show-closer “Group Four,” a spellbinding slow burn that eventually gave way to an onslaught of searing, industrial-toned guitars and the final text message, “We are caught in an endless loop … it’s time to leave the ghosts behind … and start building the future,” as if to say – with this deconstructed/reconstructed version of Mezzanine as an example – rather than accepting or expecting a reality where history inevitably repeats itself, humanity can harness the trials of the past to create something altogether new.

Needless to say, when the tour touches down Stateside in a couple of weeks, fans are in for quite the head-trip