Alanis Morissette is gearing up for a massive tour celebrating not only the 25th anniversary of her seminal album Jagged Little Pill, but also the highly-anticipated release of her brand new album, Such Pretty Forks in the Road, on May 1st, breaking her six-year hiatus for new music.

She just released the latest single from the album, "Smiling" and performed a special acoustic concert last night, February 24th, at Carre Theatre in Amsterdam. This was the first acoustic European shows out of three.
She performed a 17-song set that opened up with hidden JLP song "Your House," an a cappella daydream. She then went into several other JLP songs like "You Learn," "All I Really Want" and "Not the Doctor."

When you just f**ked up, admit it and start again. ❤️ Alanis, she is still the best. #alanismorrisette #acoustic #liveinamsterdam pic.twitter.com/7RPvejM4yg

After five songs, the Canadian crooner went into newer song "Reasons I Drink" before diving back into the JLP world. Morissette also made sure to include new single "Smiling" and ended the show with one of her other beloved hits, "Thank U." 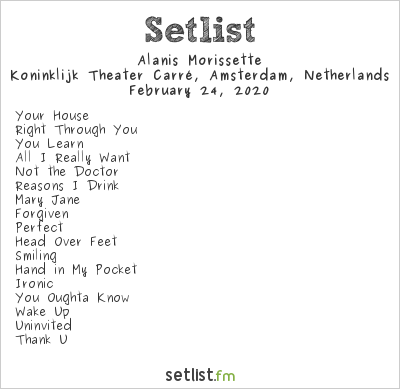 Alanis Morissette
As mentioned before, she'll be doing two more acoustic shows, one on February 29th in Munich and March 4th in London. But don't worry Europe, because the hit-making powerhouse will be returning in the fall for a FULL (non-acoustic) tour, following the North American leg, with support from Liz Phair. You can peep all her tour dates below!