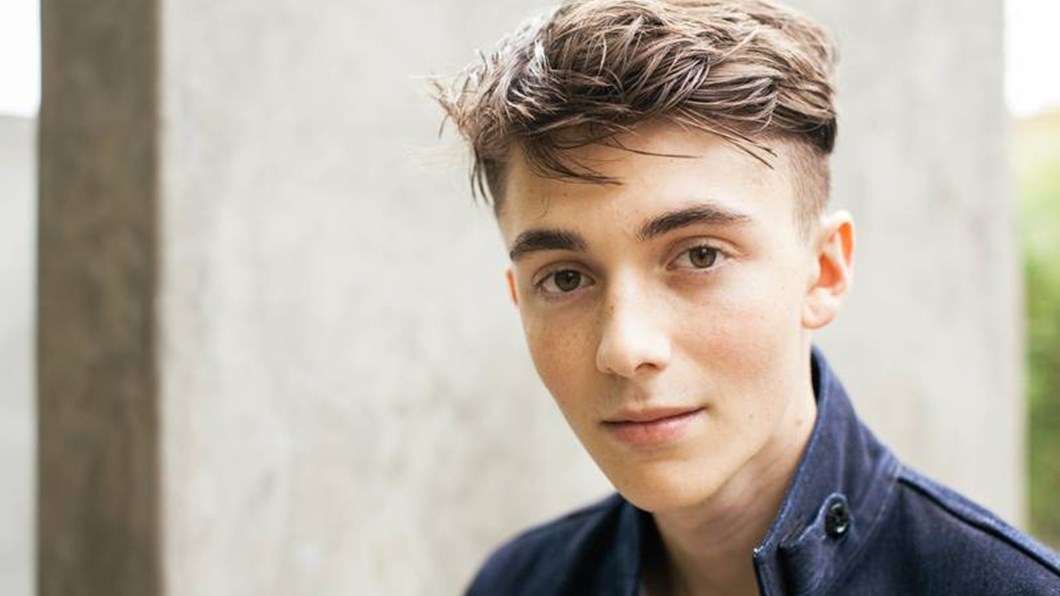 Most people spend their teenage years in a tumultuous blur of hormones and emotions. Greyson Chance spent his touring the world. After a YouTube video of a then 12-year-old Chance covering Lady Gaga's "Paparazzi" found its way onto The Ellen DeGeneres Show, the young pianist and singer was thrust into the spotlight, with many people calling him pop's latest one to watch.

The video—which has since garnered a whopping 56 million views—made it easy for folks to draw parallels between Chance and then-burgeoning pop star Justin Bieber. Both boys sported bowl cuts, had close relationships with their churches, and were discovered among the abyss of YouTube cover song vids. But the comparisons ended quickly; in 2012 Chance's label dropped him from their roster. Thus began a liminal era for the young singer-songwriter, one that grounded him and spawned a whole lot of personal growth.

"I had learned the game and then all of a sudden everyone was gone," he explains. "There was just something in me being like, 'Okay, take your time, be patient, figure out what you want to do.' I figured out what sound I wanted to have, what I wanted the lyrics to say, and I just kind of took my time with it."

Chance's patience is a byproduct of his upbringing. He grew up in the Catholic church and his religion remains a constant today as he navigates the waters of early adulthood. Now, six years after his initial discovery, Chance is releasing Somewhere Over My Head, an EP filled with smoother, baritone vocals and a newfound lyrical maturity. "You also need experience to write music," he says with conviction. "You need to live your life to write lyrics, so right now I'm just living my life and writing songs as I'm doing it." 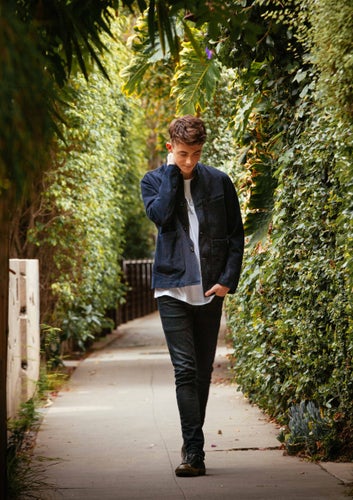 Growing up, what was your relationship to religion?
I grew up in the church. I guess my parents were kind of, let's call them loose Catholics. I did a lot of piano playing and singing in the church. And it taught me a lot of things, not just on an ethical level but on a musical level as well. It made putting a soulful element into my music a goal for me. I always think about how can I incorporate that soul into pop music and pop melody.

Do you find that challenging?
One million percent, yeah. I love when I can creep down into a lower vocal range or maybe do a melody that's a little nontraditional for pop, but over a pop-like template. People want to songs to be very commercial, and it's an artist's job to put themselves into and make it as personal as possible.

I know you're a voracious reader. How does that influence your songwriting?
I love reading the most boring non-fiction books. I think it kind of keeps me sane. When I was growing up—and I'm still growing up—but when I was 14 I was just reading everything I could get my hands on. I read anything that's concrete, just because music is so all over the place, so when I go home from a session I can be like, 'Okay, sure that's a theory. Let's just keep on reading.'

Reading also helps me get connected to the places I'm performing. I'm going to be in Indonesia and the Philippines soon, and so to me it's important to learn about those places before I go there. I want to know about the problems that are there, I want to be able to relate to the people. There's just this desire for me to learn more always. 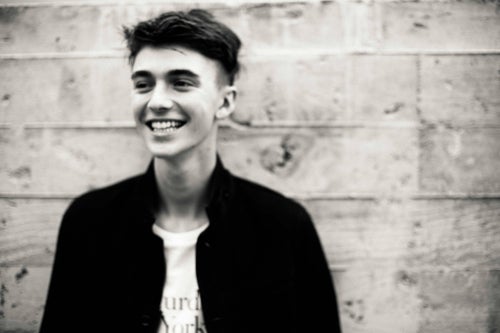 It seems like relating to your fans is a big priority for you. You've mentioned how you receive DMs from fans asking for advice.
That's one of the weirdest things for me. People will just pour out a lot of feelings; they'll say I've helped them out with this and that. It's amazing, it's strange and I'm grateful that my music impacted them in that way. People reach out to me on Twitter and they're like, 'You're so confident, how do you do that?' I'm so glad they think that, but when I go home I'm just the same kid that they are. I'm just trying to make it through and do everything that I can to make it in the world. I'm almost a little bit intimidated by hearing people say, 'He's got it, he knows what's up.' In reality I'm just like those kids who are direct messaging me.

Do you feel like you have to meet your fans' expectations?
I think there is a pressure. I don't ever want to be that type of artist where it's like, 'Oh, they're on such a different level.' I want to humanize music as much as possible and tell my story. I was a kid born and raised in Oklahoma, I made a video, posted it online, crazy shit happened. I don't like to look at myself as a figure or anything like that, and I don't want the fans to think of me like that either.

It's been three years since you toured. Why the hiatus?
When I was first put up onto the scene, I was with Ellen [DeGeneres] and that was my big platform. I was signed to Interscope Records at the time and they put a lot of time into my career, a lot of money, pumping me out, going on the road, all sorts of stuff. The bar was so high that I there was no way I think I could have reached it without going maybe three four times platinum with a debut LP, so I got dropped in December 2012. That was when I was 15, so it was this weird transition for me because again, I was just a kid playing the piano.

What was it like to deal with those situation at that age?
It was tough. I learned so much from it, and I'm extremely grateful that everything happened—even the bad stuff—because it's given me so much experience. It was super weird going home and talking to my friends and they'd be like, 'Man I hate my parents, they're putting an early curfew on me,' whereas I was like, 'I hate my lawyer, he hasn't returned my email.' I was traveling back and forth from L.A. to Oklahoma and I think this sense of being back home and being around my friends helped me out through it. I needed a bit of normalcy.

How did religion factor in during that phase in your life?
It was such a stress reliever for me. This idea that when I was in these really bad moments I had a friend who I could turn to. I think it's a common misconception that Christians go to sleep at night only being thankful. A lot of the times I was like, 'What the fuck? Why did that happen? That's messed up, why did you do that to me? This is not cool. This is not a part of the contract that we signed when I took the bread and the wine and all that stuff!' I think praying my way through a lot of stuff helped me tremendously. Whatever that is for someone, whether it's God, whether it's having a serious partner, whether it's having friends, just having that stress relief of having something to help you with what is bogging you down is really crucial.

Do you feel like you missed out on just being a kid?
Well I missed out on any normalcy in high school. I never went to homecoming, I never did prom. I enrolled in online school after the YouTube video and I'm graduating in a couple of weeks. I wouldn't go back and not post a video in order to go to prom. Of course there are nights when I go to sleep thinking, 'Shit, that would have been cool!' but then I'll listen to my friends and their problems and the high school drama and I'm so glad I didn't go through that. It just sounds so ridiculously stupid.

You just released Somewhere Over My Head and you're about to go on tour. Do you feel ready to combat the criticism that could be coming your way?
At this point, I've been in it for six years. There is just this devotion to music. There's never going to be a day where I'm not going wake up with a piano in my house. I know I'm going to stay true to that. I can't tell you how many times people have looked me square in the eye and said, 'Yeah, you're good, you're just not great.' I'm just like 'Okay, cool. Fuck you, nice to meet you. When the check comes, you're paying for it because that's rude, and I'm out!' I don't think any criticism is going to bog me down at this point. As long as the fans are happy and they're enjoying the music, I'll keep on going.

Has having fans and a record contract shifted how you view music?
I think at first it did. When the contracts first started, playing music seemed like an obligation. It lost a lot of its authenticity very quickly in the beginning. I think after being dropped by the label, being dropped by managers, going through everything, there was a time when it wasn't an obligation anymore, and I found the authenticity again. I found a love for music again that I had lost for a bit. It was a terrible thing, but six months later I was playing piano and I was the happiest I had been in a while.

What's inspiring your songwriting now?
Looking back on my EP, a lot of it is inspired by Oklahoma. When I was writing I was spending the summer in Oklahoma, sort of just being 17 and living wildly and recklessly with my friends. That was a massive inspiration for it. Moving out to L.A. and being homesick was also a big inspiration. I'm consistently inspired by my friends, the stories they tell me, the relationships I have with them, the problems I might have with them. I just had a friendship that was seven years long, and it ended over a disagreement that was worth just parting ways over, and I've already written four songs about it. Life is weird and extremely complex, but at least I have songwriting as an outlet.

Greyson Chance's Somewhere Over My Head is out now. For info and tour dates, visit his website.