Papa Roach are touring through Europe in support of their latest album, Who Do You Trust?
The trek began on February 16th in Barcelona, and will visit a slew of European cities before wrapping up March 18th in Copenhagen with support from the Hollywood Undead and Ice Nine Kills. From there, Papa Roach will fly back to the States for a month-long US tour in April.
In a statement, frontman Jacoby Shaddix said:
"This tour is long overdue — fans have been pleading for us to tour with the Hollywood Undead dudes — so we're gonna give the people what they want. Europe has had some of our most favorite shows ever and the energy is always insane."
Who Do You Trust? was released in January 2019 and features songs "Renegade Music," "Not the Only One" and "Elevate" (read our full album review HERE).
On the road, Papa Roach have been playing a handful of new songs, as well as classics like "I Suffer Well," "Scars" and "Getting Away With Murder." Their setlists vary between 15-17 songs per night, and typically include a cover of The Prodigy's "Firestarter" and a three-song encore of "Who Do You Trust?," "Last Resort" and "Born for Greatness."
Check out some highlights from their European tour so far!
February 16 — Barcelona, Spain
On the tour's opening night at Razzmatazz, Papa Roach played a 14-song main set with a three-song encore.
The setlist included new songs "Elevate," "Feel Like Home," "Renegade Music" and "Who Do You Trust," as well as the first-ever live performance of "The Ending." 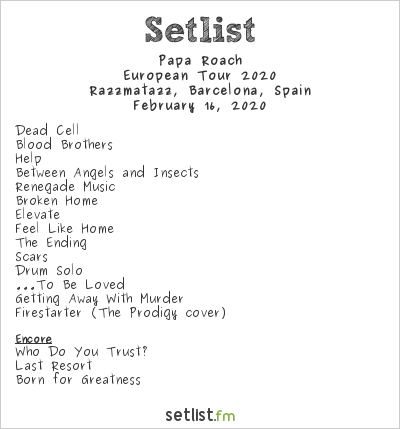 Papa Roach setlist
Papa Roach, "The Ending" live debut
February 20 — Milan, Italy
You've heard of The Mamas and the Papas... but how about Mama and Papa Roach?
Shaddix invited a fan on stage at Alcatraz to help him sing "Feel Like Home," and as it turns out, she sings in a french tribute band called Mama Roach! 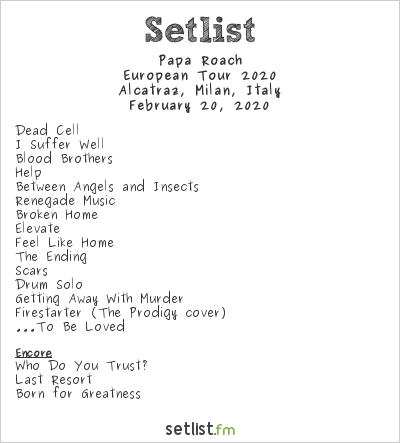