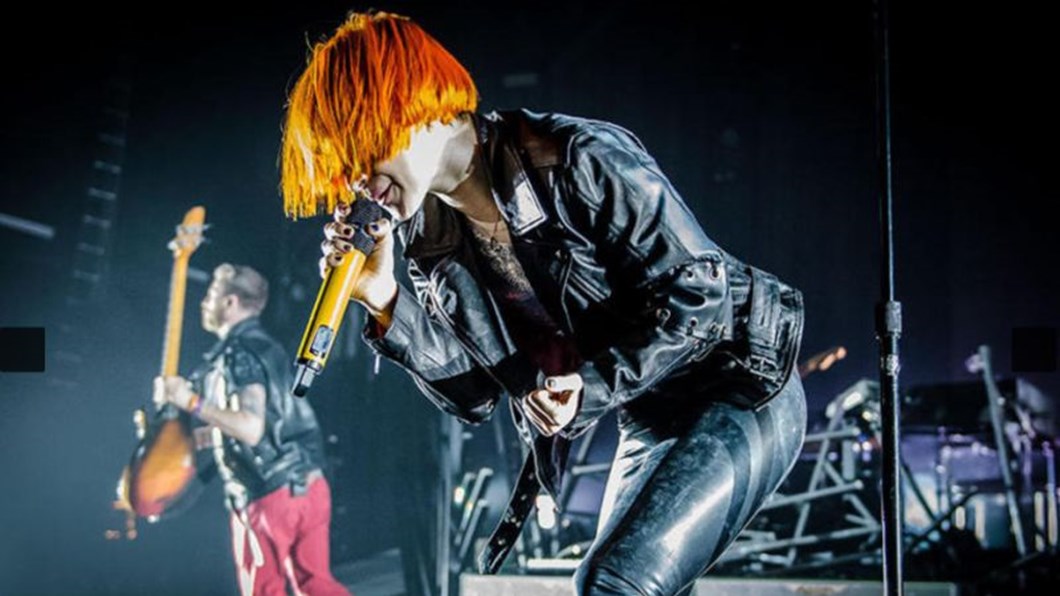 THE EVOLUTION OF PARAMORE LIVE

Paramore suprised us all when the three piece unleashed a new track into the world in April, alongside the new album, After Laughter, and a tour announcement. With "Hard Times," the band gets introspective about anxiety and getting through life's low points. Despite the gloomy subject matter, the track pushed Paramore further in the pop direction, following in the vein of the last album's singles, "Ain't It Fun" and "Still Into You."

With a funky, bubblegum-hued video, a new look and updated lineup that welcomes Zac Farro back into the band, Paramore's ever-changing evolution is more apparent now than ever. So, to celebrate the 2017 After Laughter tour (more info here), we're looking back at vintage Paramore performances to see just how far they've come.

Might as well start in the same year that Paramore signed their record deal with Fueled By Ramen and put out their debut album, All We Know Is Falling. While Hayley Williams was already signed to Atlantic, she urged her record label bosses to let her continue singing rock music with her band, and so, here they are, playing their first shows -- with a fairly big audience, I might add. The best part of the video occurs right at the beginning, where Josh Farro is seen doing some screamo verses before Williams even launches into her verse. It's a sign of the times, when screamo was at its peak and the grumblings of grindcore were making parents scared. Fresh and green, Paramore have boundless energy and seem happy just to be playing. Their early shows were in small clubs, but that wouldn't last long...

Two years later, Paramore were all over the world. They had a massively successful second album, Riot!, which boasted a more hi-fi sound and bigger-budget production. That sound was reflected onstage, where the mixing was better, the instrumentation was more rehearsed (but no less raw and wild) and the vocals were cleaner. Paramore were getting bigger opportunities, and in this performance from 2007, the band are playing MTV Live, celebrating their rapid come-up and tremendous support. The energy flows crazily, with Williams running the show: "Let me see your horns!" she yelps into the audience, dominated by 16-year-old girls just wanting to get a little angst out. There will never be a better feeling for Paramore fans than singing "Misery Business" while it was still so fresh.

Paramore had a big touring year in 2009. In 2008, they had embarked on their first-ever big headlining gig, and after the release of their third album, Brand New Eyes, they got to open the stage for No Doubt. Following that, they'd support Brand New Eyes on the road for nearly three years. Around the time that the above video was captured in Philadelphia, Williams got a bad case of laryngitis, causing the band to postpone some tour dates. The main difference of the Brand New Eyes era is the drama. Paramore were reaching new heights of fame, becoming a household name, and their theatrics had to live up to it. In this recording, you can hear fans singing along to each song nearly as loud as the amplified band. With lights flashing behind them and a more serious disposition, Williams never lost her perk, and weaves her way around her bandmates. The lights cast shadows on the band, who traded in a bit of their peppiness for rock legitimacy.

Williams' post-laryngitis voice is rawer than ever. With little squeaks and cracks, she had more edge in 2011. We chose an acoustic performance to represent 2011 because it shows Paramore's depth as performers. Not only are they killer when they're hooked up to amps, but the strength in their songwriting is enough to liven up a quiet six-string and turn it into a full show. Here they are celebrating Alternative Press' 25th anniversary by performing "Feeling Sorry." Of course, this isn't the first time Paramore recorded acoustic (OG Paramore fans will remember their street sessions from their MySpace days), but in 2010, Paramore was stripped down to a threesome when the Farro brothers left the band, forcing the remaining members to do some thinking and getting back to their roots. Their acoustic performances always feel so genuine, and after the lineup change, these types of shows gave Paramore more heart.

After the release of Paramore's self-titled album, the band showed the world all the pain and triumphs they went through with a pared-down group. As performers, they upped their game even more. Although they didn't tour half as much in the post-self-titled era as they did in the time between their third and fourth albums, they tailored their shows to fans. If they were going to continue on, they were going to do it right. In order to do that, they launched Parahoy!, their very own music festival on a boat. The cruise sailed from Miami to a private island in the Bahamas, and included bands like Tegan and Sara. The cruise was just one more way Paramore proved they weren't done innovating.

Now, with 2017 starting a new era for the band, they're on tour again. We're not exactly sure what's in store this time around. But with this much history as amazing performers, we're sure they won't let us down.