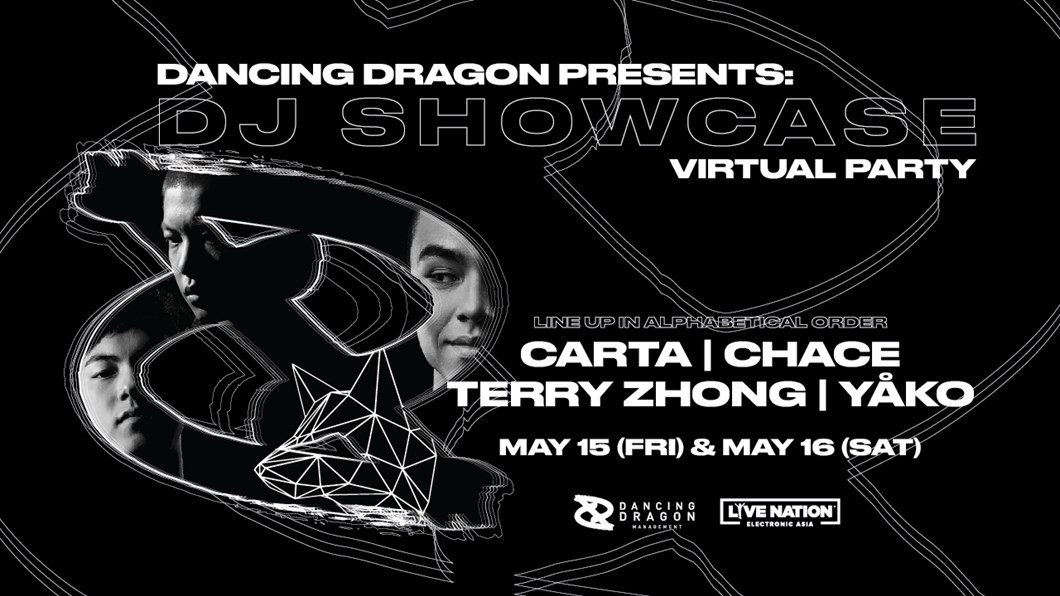 To tune into the party, head to the Live Nation’s Live From Home at 10PM (HKT) on Friday 15 May and then again on Saturday 16 May for round two!

Make sure you check out some of the past DJ sets and clips from those performing in the DJ showcase below!

CARTA - As the first Chinese signed DJ and producer at Spinnin’ Records and the first and highest ranking Chinese DJ to enter DJ Mag’s Top 100 list, CARTA has quickly established himself as the frontrunner of electronic musical talent from China. Named Asia’s 2017 No. 1 DJ, CARTA has performed on stages with major artists at festivals all over the world including Tomorrowland Belgium, Ultra Miami, Creamfields UK, and EDC Las Vegas.

Chace - A 21-year-old producer and songwriter, made headlines as China's first DJ to play at Tomorrowland in 2017. Since then, the rising star continued to expand his international presence and played at major festivals including EDC, Life in Color and Djakarta Warehouse Project and ADE. His productions have caught the ears of superstars DJ Snake, Diplo and Yellow Claw, who signed his singles for their record label.

Terry Zhong - Since premiering his 2015 debut single fusing Tropical House with Chinese Pop, Terry has released a flurry of chart-topping records. Having worked with Chinese hip-hop stars on festival anthems and collaborations with Taiwanese pop-stars, to being featured in Budweiser commercials, Terry’s music has since garnered over 60 Million+ streams. He officially signed with Canadian-based label Monstercat in 2019, and with performances already at EDC, Tomorrowland, and many of China’s biggest EDM festivals, there’s no doubt Terry Zhong is poised to make waves in the years to come.

YÅKO - Hailing from Hong Kong, YÅKO is the first-ever Hong Kong DJ to perform on EDC Las Vegas' main stage, as well as the first-ever Asian artist to perform on the main stage of Creamfields UK and World Clube Dome in Korea. Recently, the extra-loud DJ teamed up with Tokyo Machine for the bass booming single “BAD BOY”, which has garnered 500K+ streams on Spotify.