Yes, I know it’s October and it’s (probably?) too early to be talking about Christmas…

BUT: Mariah Carey, voted by the people, for the people as our official ambassador of the holidays, is touching down soon on U.K. soil to reprise her All I Want For Christmas is You European tour.

I Just Can’t wait… Tickets for my ‘All I Want For Christmas Is You’ European Concerts are on sale now! The Christmas countdown starts here! Check the link in my bio 🎅🏼🎄#AllIWantForChristmas #ChristmasCountdown #ChristmasWithMariah

In preparation of Mariah about to step back into our lives in a big way, I thought I would kindly remind you of a lesser known track called All I Want For Christmas Is You.

I am thrilled to be able to bring the story of my favorite Christmas song to new generations of families with my upcoming new animated movie, Mariah Carey’s All I Want For Christmas Is You. You’re the first to hear about this exciting news! Don’t forget to follow @AllIWantMovie for more updates. #AllIWantMovie

7. ...and been covered by all these artists? 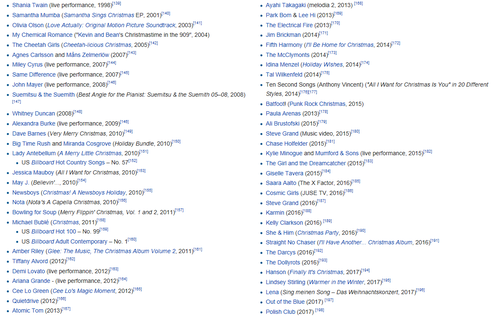 8. She also has strong ties with the big man himself.

9. Her powers grow every year. The track cracked the Billboard Hot 100 last year for the first time, 23 years after its release making it her 28th Top 10.

In conclusion, I can’t believe that Mariah Carey invented Christmas and on top of giving us all of the above, Mariah is kind enough to tour Europe this yuletide to bring some festive cheer to a city near you. Join the party here.

Topics : Mariah Carey , Christmas , All I Want For Christmas Is You , european tour , festive , XmasGigList